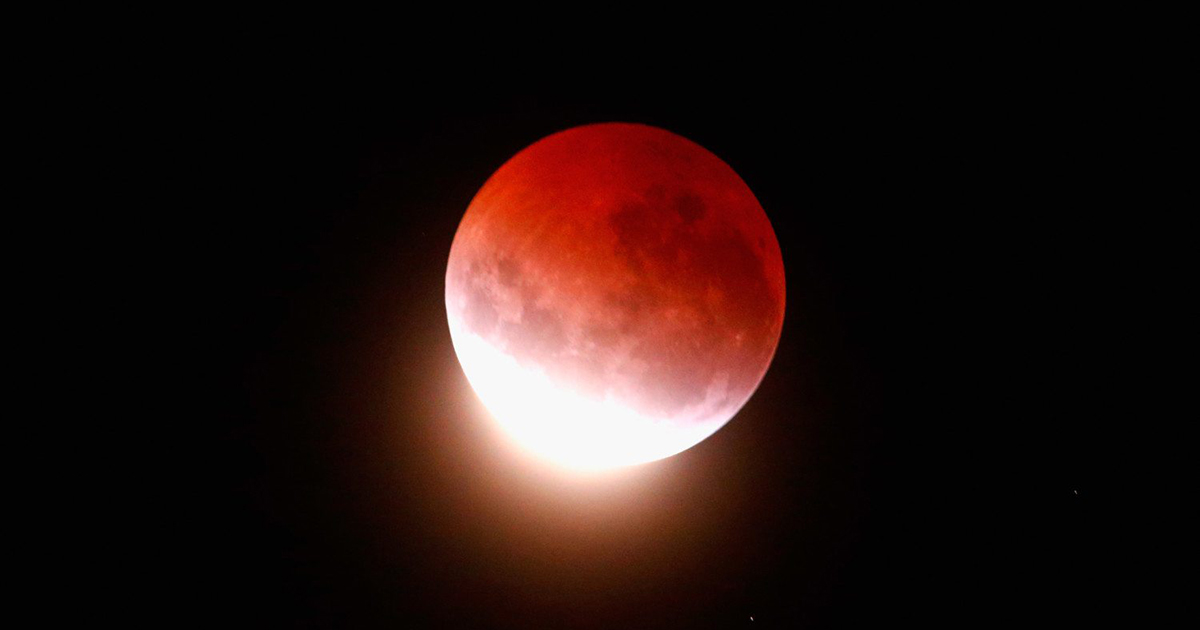 Not sure what the fuss is all about? Unlike 2017’s solar eclipse when the moon momentarily blocked out the sun, a lunar eclipse (otherwise known as a blood moon) takes place when the Earth rotates between the sun and the moon. The moon passes through Earth’s shadow is is blocked from receiving the sun’s light. However the moon is not only still visible but looks red because the Earth’s atmosphere refracts the sun’s light and indirectly lights up the moon giving it a reddish hue.

We’re not usually ones to throw shade – unless, of course, there’s a #lunareclipse. 🌕 🌎 ☀️ Sorry, @NASAMoon! Read more about the science behind the show here: https://t.co/lXB9Z2zTAe pic.twitter.com/arS4Q3u43B

Lunar eclipses aren’t terribly rare, but this blood moon also happens to be a blue moon, which means it is the second full moon to occur in a month. It is also a supermoon, which means it will be closer to Earth than normal. The result is a moon that will look extra big, extra bright, and very red.

Super soon…there will be a #Supermoon! Just before dawn on Jan. 31 a lunar trifecta – the Super Blue Blood Moon – will be visible in the sky. This full moon is the third in a series of “supermoons,” which is when the full Moon is at or near its closest point to Earth in its orbit. It will also be the second full moon of the month, commonly known as a “blue moon.” The super blue moon will pass through Earth’s shadow to give viewers in the right location a total lunar eclipse. While the Moon is in the Earth’s shadow it will take on a reddish tint, known as a “blood moon.” Make sure you get outside to experience this lunar event for yourself! Weather permitting, the West Coast, Alaska and Hawaii will have a spectacular view of totality from start to finish (swipe to see the map). Unfortunately, eclipse viewing will be more challenging in the Eastern time zone. The eclipse begins at 5:51 AM ET, as the Moon is about to set in the western sky, and the sky is getting lighter in the east. Credit: NASA #nasa #space #moon #supermoon #eclipse #lunareclipse #superbluebloodmoon #earth #sun #trifecta #sky #astronomy #solarsystem #orbit #bloodmoon #january

The eclipse began at 5:51 a.m. EST as the sky became lighter, which made viewing on the East Coast a bit more difficult. However those on the West Coast, Hawaii, or Alaska were in luck. The best views were visible in the west starting at 4:52 a.m. PST.

The Moon has started to enter Earth’s shadow…see it here? At about 7:51am ET/4:51am PT, the Earth will completely block the Sun’s light, casting a reddish shadow on the Moon during what’s called “totality”. Watch the #SuperBlueBloodMoon live online: https://t.co/RcESL4Soyk pic.twitter.com/hXoTOGKcOQ

And here’s a fantastic photo of the moon between the Earth and the sun, all lit up red:

LIVE NOW: #LunarEclipse2018! The Earth is directly between the Sun and Moon, making the lunar surface appear red. You can watch views of the #SuperBlueBloodMoon from multiple telescopes live online! Take a look: https://t.co/RcESL4Soyk pic.twitter.com/VF6U7axlWu

And that was it! The next super blue blood moon won’t be until Jan. 31, 2037 so you’ll have to wait awhile for this celestial event to occur again.

Science is so cool, isn’t it?