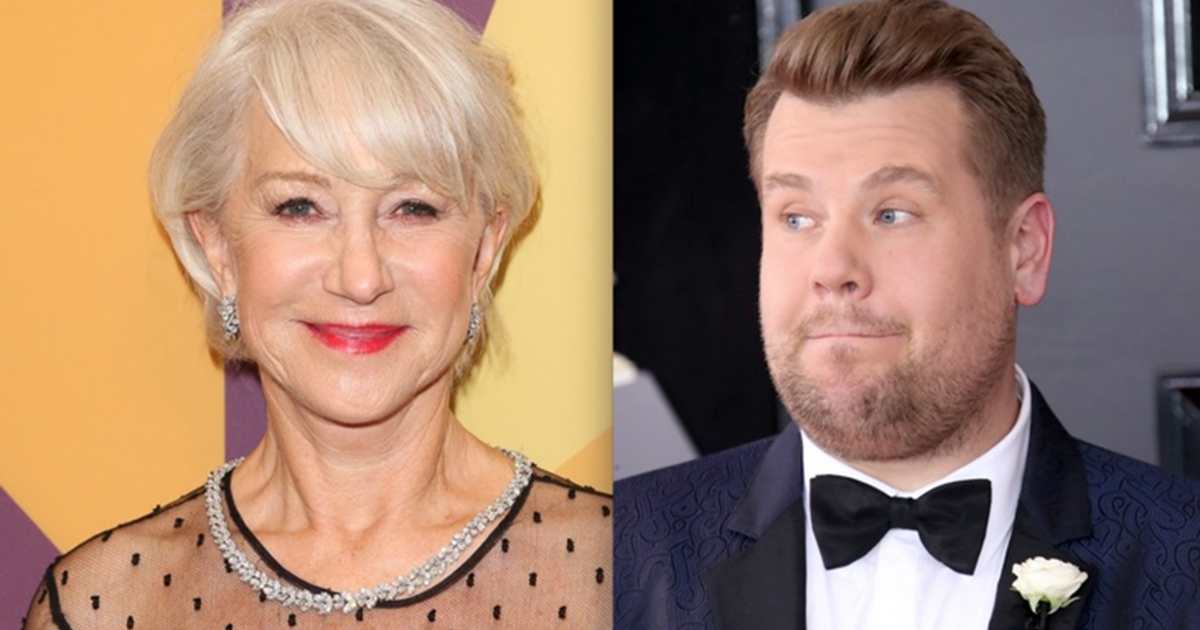 Unlikely contender Dame Helen Mirren took on the host of The Late Late Show with James Corden and impressed viewers with her rap skills in the ‘Drop the Mic’ challenge on Tuesday night.

The stellar British actress can do anything.

The Late Late Show segment is an audience favorite, with Method Man as the emcee introducing celebrity guests going head-to-head with James Corden.

Of all the contenders who’ve challenged Corden, nobody expected Mirren to be quite the rapper.

The Oscar-winning actress made her ostentatious entry draped in a shiny red robe and adorned with a crown. She was literally an untouchable force as she acknowledged the studio audience with the diminutive royal wave and left a nearby high-fiver hanging as she advanced towards the ring.

“Bow down, James. Bow down.” she taunted the host. “We’re not at home anymore. I’m the king in this studio,” retorted an unfazed Corden.

And with that, Corden kicked off the friendly, R-rated battle.

Helen is basically an icon in her craft/ When I heard she wanted to battle me all I could do was laugh/ Back home she’s considered the actress you have to fear/ We’re in America now, Meryl Streep lives here.

Mirren fired back without missing a beat.

I’m the one you should fear, wherever I go/ If I’m a pain in your ass, that leaves a lot of room to grow/ You stand out, but for games and banter/ Other shows do comedy, you just pander.

You thought you could beat me, sorry game over/ I’ll cook this beef his wife and her lover/ He’s obsessed with my exes, sorry James I’m not single. But you know I taught your little mister to tingle.

Just when I thought (Queen) Helen Mirren couldn't get any more badass, she does drop the mic and destroys @JKCorden @latelateshow. "You're welcome for this headline, Helen Mirren can rap." https://t.co/pEmeqOkcMT pic.twitter.com/94VpYnKims

“You said that was strictly between us,” Corden blushed, as the riled audience guffawed with “oohs” and “ahhs.”

The host continued with his turn at the mic, ribbing the actress for her overrated talent.

Mirren set the record straight. In his face

I’ve played the queen but also warriors and witches/ Crime lords and wizards, bosses and bitches, detectives and whores from all on to Shakespeare/ The only role you ever play is ‘Guy who begged to be here.’

She wasn’t done. She mocked her competitor by referencing another late show host.

This battle is fun, I’m glad that you asked/ It’s the only bit you didn’t find in Jimmy Fallon’s trash.

The segment wrapped up with a royal blow.

Compare me to Meryl, Judi, Maggie, but why?/ They’re not my competition, they’re my ride-or-die/ See, women are a force to be reckoned with, and I reckon I wrecked you, you’ve been to hell and back, bitch.

Based on the studio audience, Method Man affirmed that Mirren was the clear victor. And with that, Corden bowed down, giving the queen the respect she demanded at the beginning of their epic match.

#HelenMirren could rule the world!

Definitely in love with #DameHelenMirren

OMG. Helen Mirren, epic rap battle and tater tots is like everything I’ve ever wanted! https://t.co/WH5lLjIheU

Love her and love him so it was a win win for me.