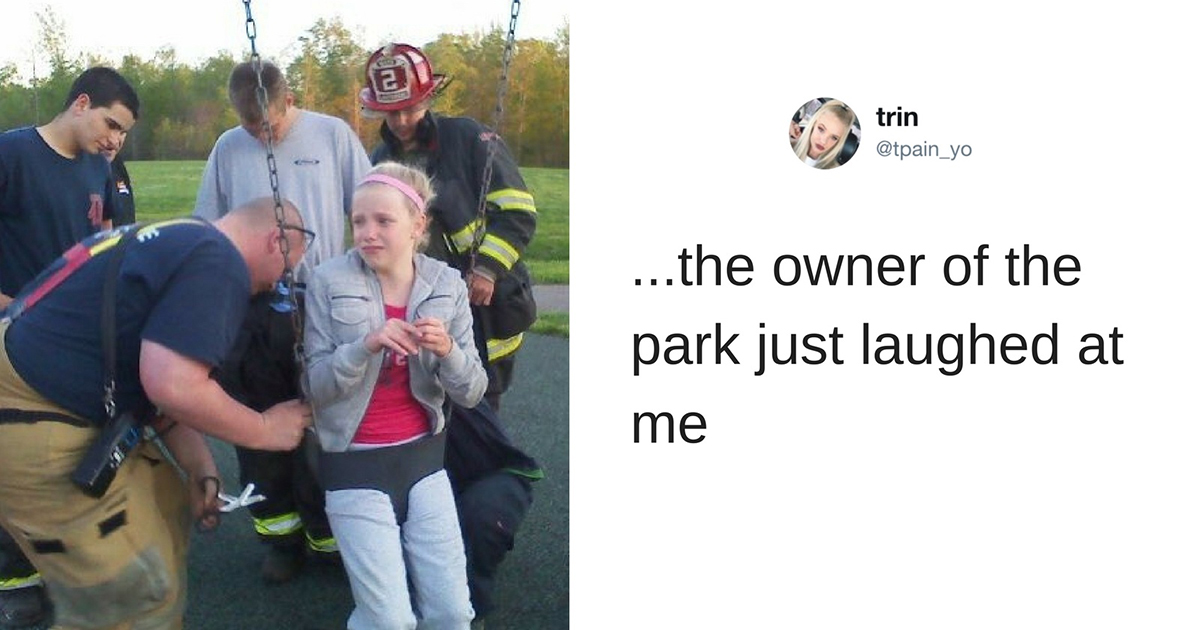 Let’s be honest here: swings are aren’t always easy to navigate even when they’re the correct size for your age group. When you begin trying to fit into swings made for infants…well, let’s just say you’ve entered the danger zone. Twitter user Trin discovered this first hand a few years ago when, on a dare, she climbed into a baby swing, only to find getting out was much harder than getting in. No amount of pulling seemed to make any difference, and the situation quickly went from bad to worse.

Alright y’all I’m posting these throwbacks of me one more time and if I don’t go viral I’m gonna be pissed pic.twitter.com/mnv0pFv6uW

Trin did not receive very much sympathy for her situation at the time.

Felt the need to add the people behind the lens of these iconic pictures, y’all can tell I was stressed out by my hands lmaooo pic.twitter.com/4qpDauiOLX

nope hahah the owner of the park just laughed at me

Getting stuck does NOT look fun. Fortunately, Trin was in good company.

It turns out getting stuck in toddler swings is a persistent problem for the fire department.

Some incidents are even worse than normal, however. In May 2017, an Aunt climbed into a swing to demonstrate how to get out (her niece was already stuck nearby). An hour later, the fire department had to help remove them both. Mel Ellis, the aunt in question, isn’t proud of her story:

We were in the park and Layla had got into the swing. She was calling across to me for help but I thought she was messing about. I eventually went over and saw she was stuck. I was trying to give her advice – to get her out front ways, back ways – but she was really stuck. I said to her, “Just use your arms to lift your weight out – look I’ll show you.”

So I climbed in to demonstrate. I have recently put on a lot of weight but didn’t think that much. I was well and truly stuck. We were both in there for about an hour. It was the most embarrassing thing that has ever happened to me.

Let this be a lesson to everybody! No matter how tempting it may seem (and WOW I know it looks fun), do NOT try to get in an toddler swing. It won’t end well for you.

Its baffling how many people do this