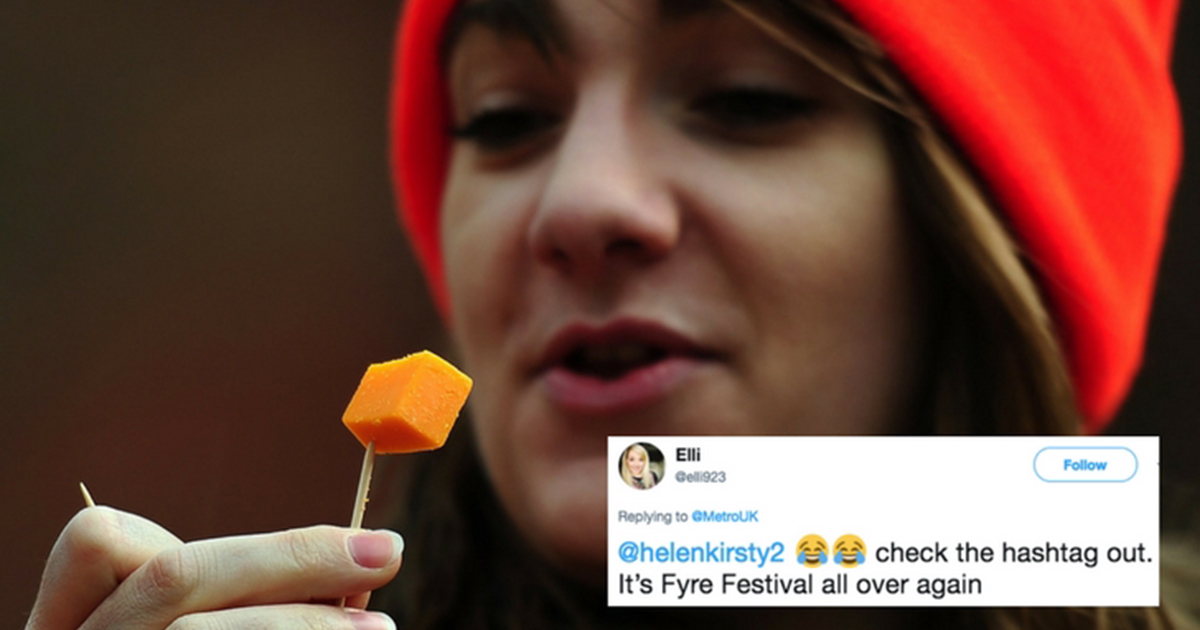 If you’re a fan of unlimited cheese and wine, then a recent event in London probably sounded as close to heaven as one can get.

But for attendees of the Giant Cheeseboard event over the weekend, things quickly turned into a nightmare.

In a post on Twitter, the organizers of the event, North Greenwich’s Studio 338, advertised it as “unlimited cheese, mulled wine, and fun.”

6 Days until this dream is a reality here on the terrace…https://t.co/KitjETMc7n pic.twitter.com/YTcW3F2RW5

But for people who waited in the cold for over an hour to even get into the event, the fun turned out to be very limited:

Oh, but the disappointment didn’t end there.

Once inside, guests were treated with a very limited selection of cheese, assuming there was still any left by the time they got through the ridiculous queue lines, as well as sad, dry crackers and bread, and watered-down mulled wine:

#GiantCheeseboard this is a seemingly endless queue of people waiting for dry crackers, cubes of cheddar and watered down mulled wine. Don't bother wasting your time if sadly you've already wasted your money pic.twitter.com/Zfk6dJuxhY

The people struggle for the last scraps of Camembert. The suffering has gone on too long. pic.twitter.com/Qtyd7CBodE

We queued for 40 minutes to find out it is low alcohol mulled wine pic.twitter.com/AGVJHIW7pP

#GiantCheeseboard this is one of the most depressing things I've seen pic.twitter.com/Ufs8rz3sHK

A lone cheese plate on a bus stop #giantcheeseboard pic.twitter.com/xraNCe1uGc

Why is there people dressed as Tom the Cat at #giantcheeseboard, surely it should be Jerry? Even the character organisation is shocking!!

Soon #GiantCheeseBoard started trending on Twitter, with many people venting their frustrations. And there were several to choose from:

.@studio338 organised #thegiantcheeseboard WORST EVENT EVER. Shop bought cheese, overcrowded, staff who lied when requesting a refund. Security admitted they’ve done it before. NEVER use this venue or go to their events. Eurgh. @MailOnline would have a field day.

Not just bad cheese. TERRIBLE organisation. This stank for all the wrong reasons. So upsetting when you’ve spent £40 a ticket and they RUN OUT.

Fucking disgusting. Cheese was from Costco, the unlimited mulled wine wasn’t unlimited, the cheese ran out, the staff lied to us, the roof was leaking… need I go on?

So #giantcheeseboard was a SHIT show. Lied to us. False advertising. @MailOnline @TimeOutLondon this is an event which scammed people out of up to £40, lied, wont refund and now are deleting reviews.

The #GiantCheeseBoard event was an absolute disaster and people are fuminghttps://t.co/bahxiOYeTP

All in all, it felt very reminiscent of the Fyre Festival, a failed music festival created by musician Ja Rule and wannabe-tech-entrepreneur Billy McFarland which was supposed to happen on a lush private island in the Bahamas in April.

The tickets ran into the thousands to hundreds of thousands of dollars, but when guests started arriving, it was clear that there was a lack of financing and organization, as evidenced by posts from attendees who only saw a few relief tents and were treated to that infamous “cheese sandwich”:

The dinner that @fyrefestival promised us was catered by Steven Starr is literally bread, cheese, and salad with dressing. #fyrefestival pic.twitter.com/I8d0UlSNbd

So maybe the Giant Cheeseboard wasn’t quite at that level of disaster, but for Londoners, it certainly felt that way:

Did Ja Rule show up https://t.co/hRXX0JSPvw

#GiantCheeseboard looks like the British equivalent of Fyre Festival.

Cannot overstate how bleak this is pic.twitter.com/9j9uaDS7sD

According to BuzzFeed, event goers were expecting a bit more, especially considering that it had been promoted by TimeOut and Metro.

“I guess expectations were foolishly high but I expected a food-centric event based on how it had been sold,” 33-year-old Peter Phillips said. “You’d naturally have presumed an array of cheeses of reasonable quality as well as mulled wine.”

"It was stunning that they'd managed to fuck up the simplest of all concepts: unlimited wine and cheese." 🧀 🍷 😩 https://t.co/wg1HroSATI

But instead they were treated to “five school-style tables of non-description cheese being served by people in mouse ear head bands, and a scattering of dry crackers and bowls of peanuts.”

After people started demanding refunds, the organizers shared a lengthy post on Facebook in which they refuted the claims that they had failed to deliver as promised, or had somehow deceived their guests:

Guys,If we felt that we had not provided any of the things included in your entry price then we'd be the first to hold…

Posted by The Giant Cheese Board on Sunday, December 17, 2017

In addition to affirming that they never ran out of cheese, and that it wasn’t bought at a supermarket, they also said that many people enjoyed themselves.

“The fact is that a LOT of people had a great time,” they claim. “We have so many videos and photos of all the fun that was happening around the venue – but a small proportion of people had expected something else.”

So while disappointed attendees might not be seeing a refund any time soon, at least a few people had some fun with it all:

From now on #GiantCheeseboard is my new favourite synonym for 'clusterfuck'.

Q. How was your night?
A. It was a total 'Giant Cheese Board' of an evening#TheGiantCheeseBoard