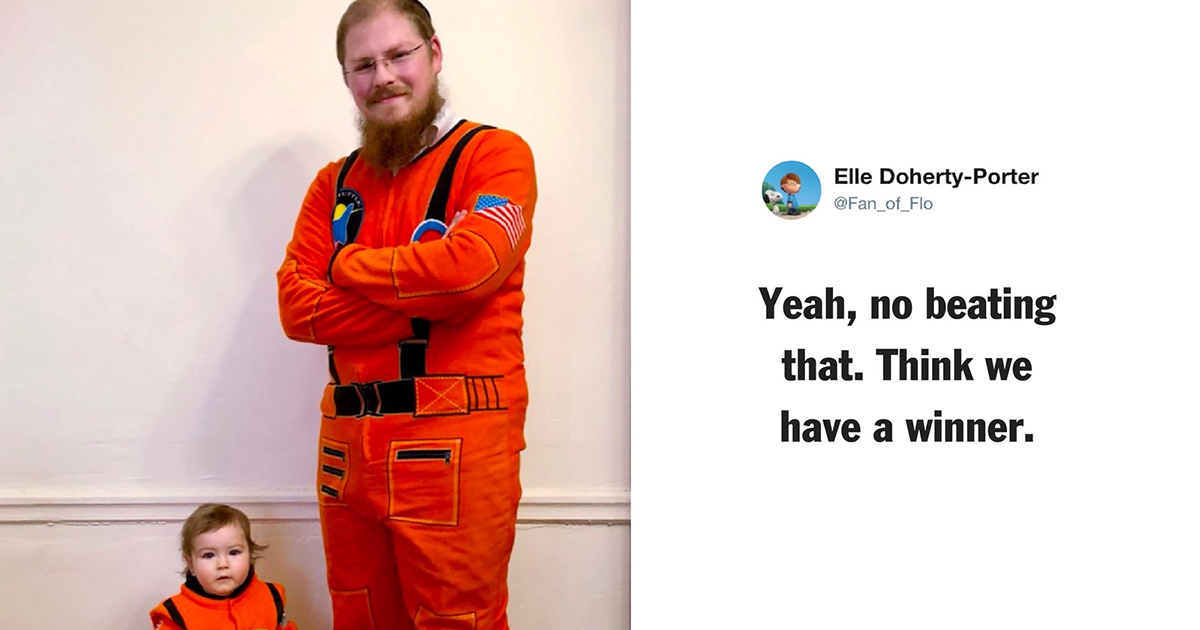 Spencer Hall, a featured contributor for SBNation who tweets under the moniker “Bum Chillups,” reached out to dads on the Internet to display their love of fatherhood by unabashedly sharing their “most dad” outfits.

The result was heartwarming, with dads engaged in a friendly match of “who wore it best” despite the baggy cargo pants, oversized shirts, and knee-high tube socks.

“Dads of Twitter, let’s appreciate each other,” Hall encouraged. “I need to see pics of you in your most dad outfit.”

Dads of Twitter, let's appreciate each other. I need to see pics of you in your most dad outfit.

To kick things off, the sportswriter from Atlanta, Georgia, shared a photo of himself with his boys entangled in some mischief. “I’m here to contribute a photo of me being assaulted in a playground tunnel in an ancient Florida shirt, the younger child just kicked me in the head,” he wrote, keeping it real.

I'm here to contribute a photo of me being assaulted in a playground tunnel in an ancient Florida shirt, the younger child just kicked me in the head pic.twitter.com/bWryi0G9ny

It didn’t take long for prideful dads to don their best – whether it be matching onesies or on-the-nose graphic tees. Whatever their options, “dadding” suited them all wonderfully.

Author Lawrence Ross shared a humbling tweet, recovering from a Thanksgiving feast. “Dad and Kid at Love Field after Thanksgiving around 6am,” he said. “Dad’s belly now a blimp flag. Mom snoring off screen.”

Dad and Kid at Love Field after Thanksgiving around 6am. Dad’s belly now a blimp flag. Mom snoring off screen pic.twitter.com/N1mAR9l374

“Thank you for braving the early morning for this outstanding father/son pic,” Hall responded.

An impressive photo from @djwallysparks showing “three generations of Walter” was pretty epic.

The cute shirts speak for themselves. The daughter’s shirt reads, “He spoils me with his time. – Daughter.” While dad’s shirt reads, “I don’t babysit. I parent. – Dad.” Word.

These t-shirts say it all! Adorable!

‘Tis the season to be lumberjacks.


Matching guayabera shirts don’t get any cuter than this.

The matching astronaut outfit below was out of this world and upped every dad’s game.

“…Yeah, no beating that. Think we have a winner,” wrote @Fan_of_Flo , while @qued77 declared, “Ok you win the matching outfit throw down, that is epic.”

But the challenge wasn’t over. More fathers wanted to share their awesome dad outfits.

Chillmonger’s baby boy must feel like he’s on top of the world. The proud dad tweeted, “I’ll never have use for that onesie again but can’t get rid of it. May just frame the onesie and shirt with the picture and put it in his room.”

Then, a friendly tip came his way.

My man, this is why shadowboxes were created 😍😍😍😍

Also: shadowboxes tend to run a lil bit more expensive than regular frames but if you keep an eye out on sales & coupons at craft stores it helps. (Or if you live near an IKEA the KASSEBY frame is A++ price & quality & easily painted whatever color you want) Happy framing!

Overall, the outfit is signature daddy.

The lack of socks sends this one to another level of dad-dom.

A ONE MAN PORTLAND cc @ShaneWallCTO

A shout-out to “cheer dads” everywhere.

Hall called this one, “Intense dadding.”

“After dragging the kids to see Metallica,” wrote the heavy metal fan, sharing his passion with the kids.

After dragging the kids to see Metallica. Not pictured but definitely there: cargo shorts and a sensible pair of walking shoes. pic.twitter.com/2msHppfbdX

Daredevil kids. Hall was impressed with this one as well. “Great bedhead and supervising children putting themselves in danger? KING DAD.”

One user called this “Dadding like a Jedi.” The force of love is strong with these two.

… I can’t even deal right now. Pollen got me all chocked up and in my feelings🤧As you were, sir! #FathersDay is every day!

This pic has me in tears. My Dad passed years ago… but he coached my brother's FB team and would let me blow his whistle after I got tired playing in the bleachers.

This took me back. Thanks for sharing. #Beautiful

They all wear it well. And I’m not reaching for that box of tissues. Nope.