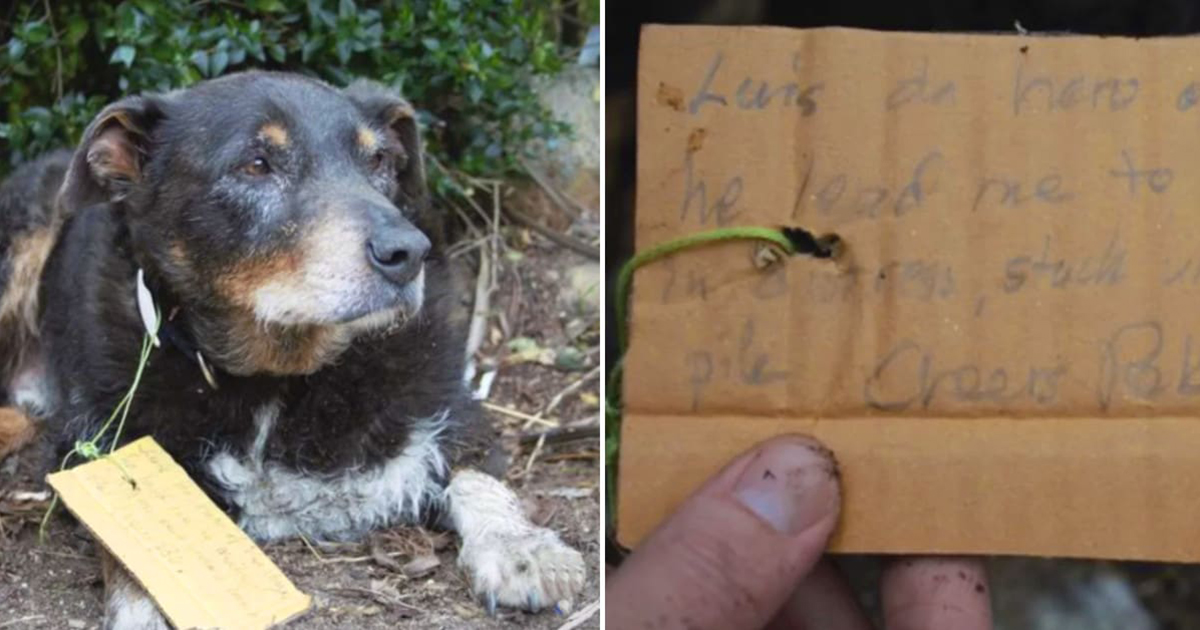 Louie the sheepdog proved himself to be the ‘hero of the day’ after embarking upon a rescue mission that surprised his owners and impressed his neighbours.

Marolyn Diver and her family adopted Louie from a local shelter years earlier and the rescue dog was settling into his older age of 12 years old well. He preferred to stick around the house nowadays instead of roaming about looking for adventures in the nearby forest.

So when, one day, Louie suddenly went missing, Marolyn found it rather bizarre and worried that the ageing dog wouldn’t be able to find his way back home.

Much to the relief of the family, the dog eventually returned back home. But he had something else with him. Wrapped around Louie’s neck was a piece of string with a cardboard note attached to it. Confused, the family took the note off and read it, worried that something terrible had happened.

[Louie] looked so exhausted and had basically just collapsed. We were concerned someone might have hurt him.

However, much to their relief and surprise, the cardboard note had a different sort of message written on it… It turned out that their beloved dog had in fact spent the day being a hero!

The note was from their neighbour, Rob, and it told of Louie’s brave rescue mission that led him to his lost dog, Maddy, who was trapped under a branch pile in the wood.

Louis is the hero of the day. He led me to Maddy, in distress, stuck under a branch pile. Cheers, Rob.

Wanting to know the full story, the Divers called their neighbour to find out what happened. It turned out that when Louie had disappeared, Rob’s dog Maddy had gone missing and managed to get trapped under a large pile of branches.


Louie had somehow managed to come across Maddy and immediately ran to find farmer Rob. He made the neighbour follow him until he came across Maddy and the pair promptly began their rescue mission for the cowering pup. Rob moved the branches off Maddy as Louie dug the ground next to him. Their teamwork resulted in successfully freeing Maddy unharmed.


Rob said the second she was free both dogs ran to a nearby pond and jumped into it exhausted and drinking water.  He then gave Louie a huge handful of dog biscuits as a thank you. He knew Louie might get in trouble for being late home, so he thought he would write a small note to explain his absence.

As exciting as the rescue mission was, it managed to tucker old Louie out and he was in bad shape for the rest of the evening. However, it seemed that the only thing he needed was for a visit from his dear friend to perk him up.

The next morning, Rob came to the house with Maddy riding in the front basket of his bike. As soon as Louie saw his friend he seemed to make a miraculous recovery and was back to normal in no time.

Louie’s clever actions have made the people around him even more fond of him, if that was even possible! I think we can all agree that Louie is a true hero and a loyal friend to Maddy.

If you loved Louie’s heroic story then please let us know and leave your thoughts in the comments below.