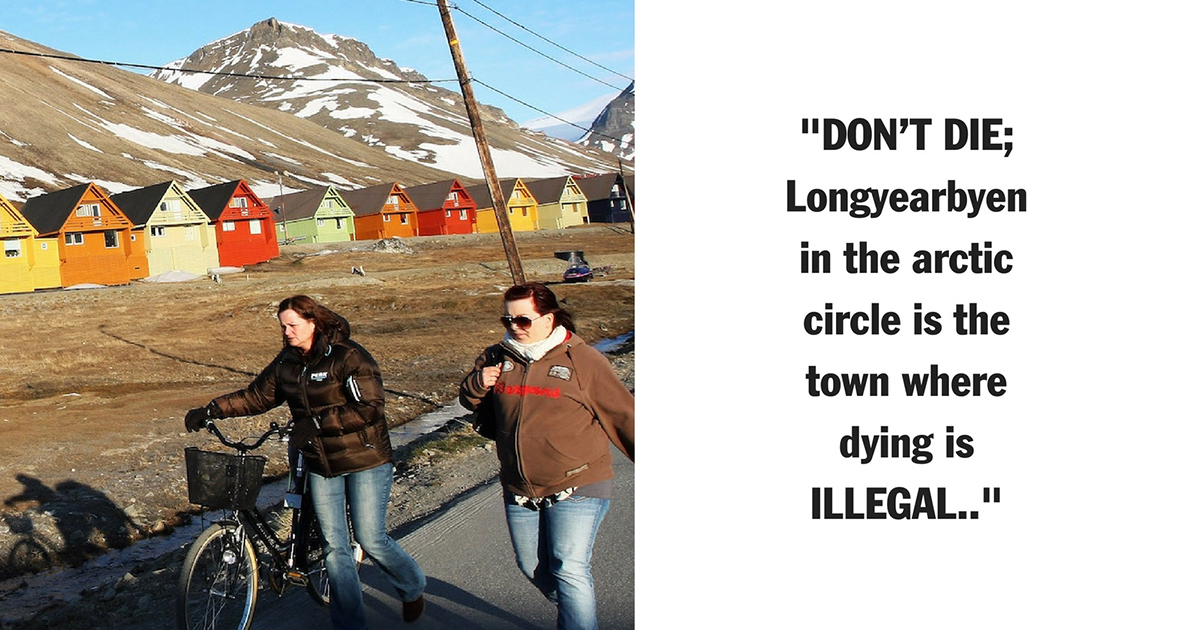 You wouldn’t want to be caught dead in the northernmost town of Longyearbyen in Norway. It’s illegal for your body to be buried there.

But the peculiar law is justified by the fact the arctic town, with a population of 2,140 residents, is too cold for bodies to decompose.

The law prohibiting death on the island was introduced in 1950 when locals discovered that the bodies buried in the towns cemeteries were preserved due to the ground’s perpetual state of permafrost. Residents were concerned the diseases that killed the person were surviving in the corpses, leaving the town vulnerable to infection.

Their fears were legitimized.

Scientists were able to extract samples of the living flu strain that killed 5% of the world’s population from the bodies killed during the 1918 flu pandemic, 80 years later.

Longyearbyen in the arctic circle is the town where dying is ILLEGAL https://t.co/BZ0lZB2E2Z via https://t.co/yKk433EPgj

According to Laughing Squid , the narrator in the video revealed, “In what came to be known as the Spanish flu pandemic, of the up to 100 million individuals who died, eleven were in Longyearbyen.”

Laughing Squid further detailed why dying in the remote town is illegal.

Researchers still don’t fully understand why the 1918 flu was so deadly, and they don’t just have samples lying around. So these bodies buried in the arctic permafrost potentially hold some of the clues that could stop a future global pandemic. But in the meantime, you really don’t want diseases that could obliterate future civilizations just laying a few feet underground preserved for eternity. And Longyearbyen agrees.

Bodies are interred 1,200 miles to the nearest city of Norway’s capital, Oslo.

Residents aren’t exempt from this particular law even if they’ve lived in Longyearbyen their entire lives. Cremation is an option, but those who’ve been diagnosed with a terminal illness are flown to the mainland where they live out the rest of their days.

Dying is banned in Longyearbyen, #Norway because bodies buried in the tiny cemetery were not decomposing due to the cold. #HappyNorwayDay 🇳🇴 pic.twitter.com/eCCY0hw1Df

Jan Christian Meyer, from the Norwegian University of Science and Technology, told The Sun , “‘If you seem to be about to expire, every effort will be made to send you to the mainland.”

Death isn’t the only complication associated with living in Longyearbyen, where the sun doesn’t rise for four months in the winter.

Although there is a university, commercial airport, department store, and a bank, the remote town lacks a major hospital and elderly care facilities. Expectant mothers are flown to the mainland to give birth and return weeks later after delivering.

Town where dying is illegal has many other bizarre laws of living.#Longyearbyen #Norway https://t.co/04Au3WQ7kP

The island has other offbeat mandates. Because polar bears are often spotted in the surrounding wooded areas of the town, it’s considered illegal to leave Longyearbyen without a gun.

Cats are also banned in order to protect the arctic bird population.

Another strict regulation is reserved for alcohol. Due to low alcohol prices on the island, residents are limited to purchasing 24 cans of beer, two bottles of liquor, and half a bottle of fortified wine, per month.

With the unique set of challenges towards being a resident on the island, maybe you wouldn’t want to be caught dead in Longyearbyen after all.

In the remote Arctic town of Longyearbyen, dying is illegal. If you fall gravely ill there you will be flirting with a jail term. #Strange