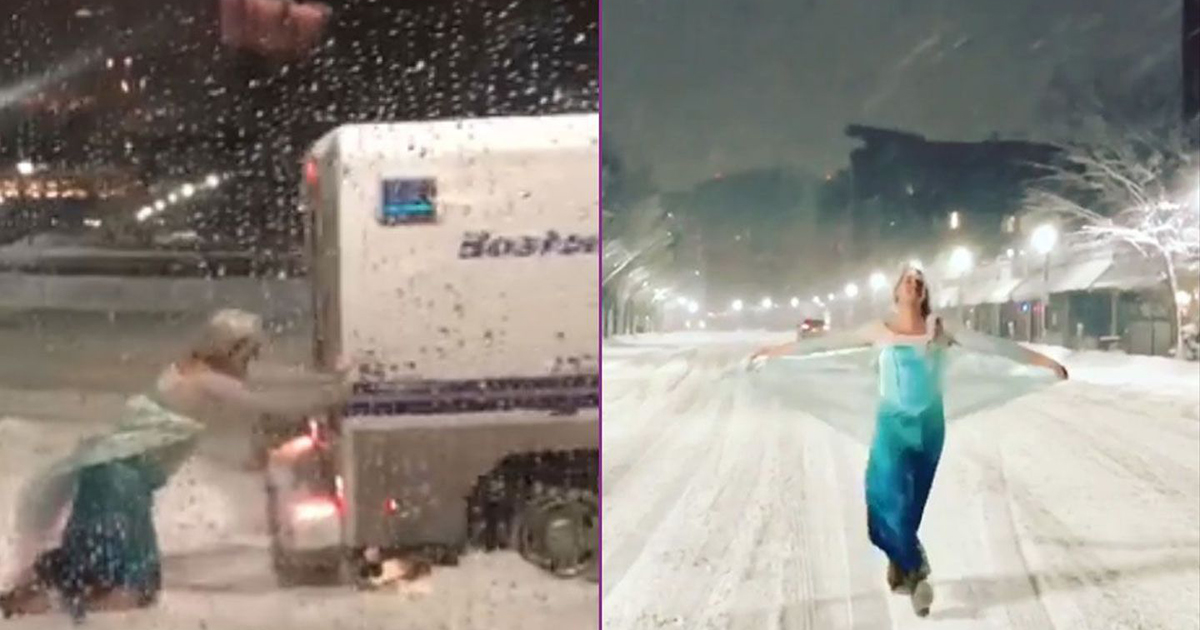 Another nor’easter hit New England this week, and everyone is over this winter weather—except for a certain cold-loving Disney princess.

A video taken by Christopher Haynes shows a drag queen dressed up as snow princess, Elsa, from the animated Disney film, Frozen, helping a police wagon get unstuck from the snow outside The Gallows, a bar in the South End neighborhood of Boston.

Patrons from inside the bar can be heard in the video cheering on the queen by yelling: “Come on, Elsa!” as she hikes up her dress to push the truck out of the snow bank.

A drag queen dressed as Elsa just single-handedly freed a stuck police wagon from a blizzard in the middle of March. If that sentence doesn't perfectly encapsulate the spirit of Boston, I don't know what does.

“The Gallows is just one of those places that everybody in the neighborhood everyone knows is open on a snow day,” Haynes told People. “It was rowdy. All of a sudden these drag queens come in, and one of them dressed as Elsa. He was like ‘I wanted to blend in tonight so I threw this on.’ Nobody even knew this cop was stuck, but he ran out to help.”

The Gallows’ manager, Allegra Wolff, explained that the police truck got stuck in the snow when an officer came in for some burgers, and couldn’t get out.

“We were super busy, and Elsa and some of her friends came in and were dancing around having cocktails,” said Wolff. “Elsa was the first one to run and prance out and help. It was amazing. He started pushing with all his might, and finally got the car unstuck.”

First of all…I would just to say that regardless of the obvious similarities, this is NOT me. #bostonsnowstorm #winterstormskylar #elsa #frozen #sorrynotfrozen

People caught up with Elsa who is really Jason Triplett, an attorney from Boston who attributes cabin fever to his Elsa escapade that night.

“Everyone will be over it by noon,” Triplett commented. “But if this is my 15 minutes, I would like to leverage it to meet Adam Rippon.”