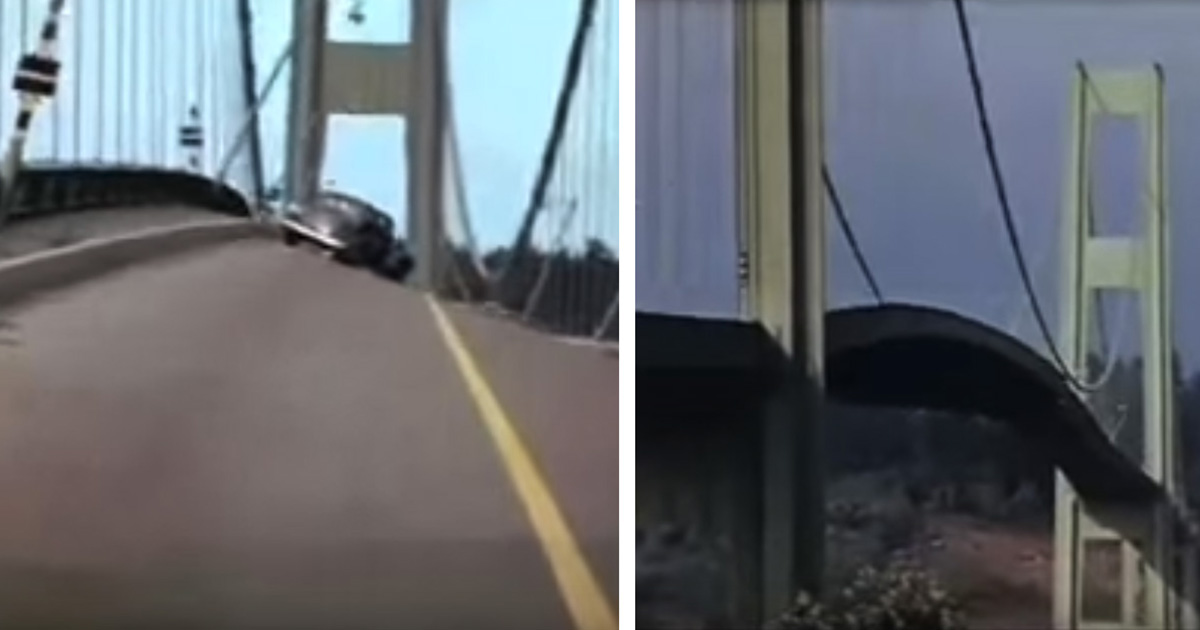 It was opened on July 1, 1940, but collapsed 4 months later on November 7. The collapse was unlike any before it and the repercussions have left an effect on structural design that’s lasted for nearly eight decades.

The footage above was captured by local camera shop owner Barney Elliot. The film shows Professor Leonard Coatsworth attempting to rescue his dog, who was trapped inside the lone car on the bridge.

Coatsworth wrote about the experience in an editorial published by the Tacoma News Tribune,

Around me I could hear concrete cracking. I started back to the car to get the dog, but was thrown before I could reach it. The car itself began to slide from side to side on the roadway. I decided the bridge was breaking up and my only hope was to get back to shore.”


“On hands and knees most of the time, I crawled 500 yards or more to the towers… My breath was coming in gasps; my knees were raw and bleeding, my hands bruised and swollen from gripping the concrete curb… Toward the last, I risked rising to my feet and running a few yards at a time… Safely back at the toll plaza, I saw the bridge in its final collapse and saw my car plunge into the Narrows.”

His cocker spaniel was the only known fatality of the Tacoma Narrows Bridge disaster.

The footage is still reviewed today in engineering, architecture, and physics classes around the globe. For years the disaster was falsely attributed to elementary forced resonance from the wind providing “an external periodic frequency that matched the bridge’s natural structural frequency.”

Later research shows that the failure was actually caused by aeroelastic flutter, where a point in the structure suffers from simple harmonic motion with zero dampening leading to inevitable failure.

Due to shortages in raw materials during WWII, the bridge would not be replaced for another 10 years. Its replacement was opened to traffic on October 14, 1950. Fifty years later traffic demanded a second bridge, which was constructed and opened to traffic in July, 2007.