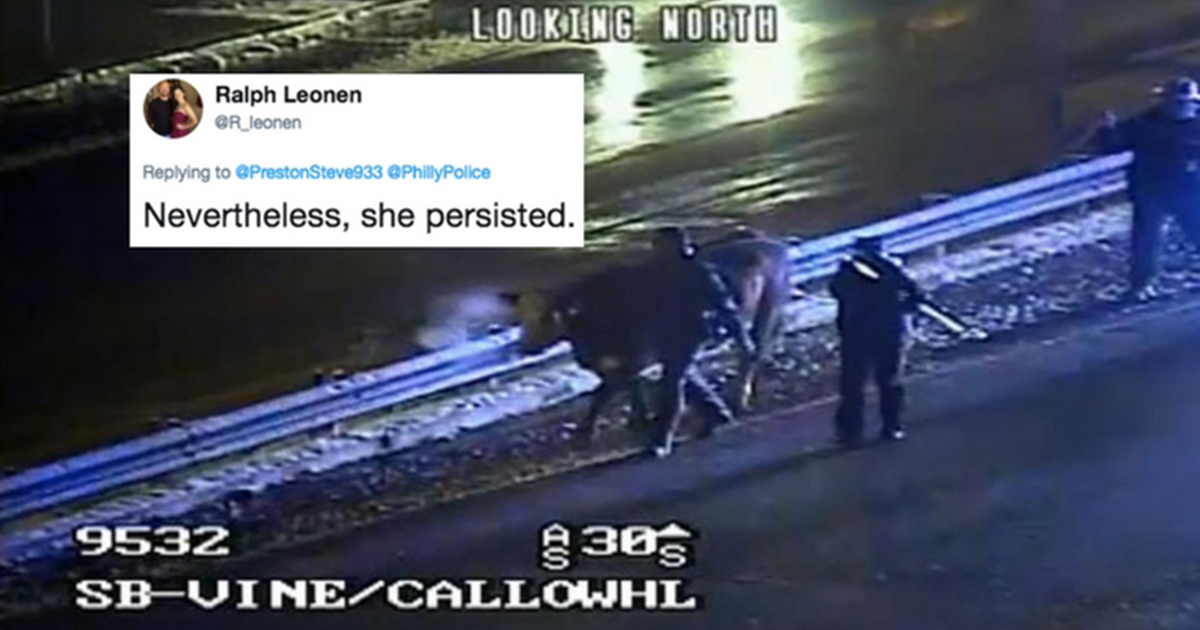 A cow that was part of a live nativity scene at a church in Philadelphia escaped not once, but twice Thursday morning.

Stormy the cow was clearly not having any of the holy tradition, and decided to run off. According to ABC 6 News, in her first daring escape at 2:15AM, the 7.5-year-old Hereford made it to I-95, shutting down a few lanes of the highway before being captured by police and animal control workers.

"Utter" madness on I-95 as a cow breaks loose from a live nativity scene in Philadelphia. Does this tweet need more cow bell? https://t.co/5ppVd42UOz pic.twitter.com/dW7Q6eoWSW

Stormy waited a while before plotting her next escape. And this time it was right in front of ABC 6’s Action News cameras.

At 6:20AM, according to the station, she first escaped into the churchyard near the nativity enclosure, but soon she was back out on the streets. Reverend Michael Caine “urged” Stormy back into the yard, but it was too late. She was off.

The bewildered Philadelphia Police Department took to Twitter to warn drivers of a potential cow hazard:

If you're in the area of 4th and Market, beware of traffic delays. A cow is loose. Again. No, we can't believe we're tweeting this either. pic.twitter.com/3FW6iHzQws

Thanks! And please bring @ChuckNorris if you can!

Eventually Stormy made her way to the fourth level of an Old Town parking garage, where officers once again managed to corral her:

What did you do today? This cow named Stormy broke out of her pen twice, ran with traffic along I-95 and reached the fourth level of a Philadelphia parking garage. https://t.co/fRiZNUwErg pic.twitter.com/irSVgzGz5G

i think the chances it escapes again are pretty solid. this cow feels that it is destined for bigger things than Philly church nativity scene

TFW you just want to explore the City of Udderly Love but they say you’re too big and don’t know the traffic laws #stormythecow @NBCPhiladelphia pic.twitter.com/5MOofN9fCT

i think the chances it escapes again are pretty solid. this cow feels that it is destined for bigger things than Philly church nativity scene

While it’s unclear how Stormy managed to escape, Reverend Caine told ABC 6 that people had expressed concern for the animals, considering the cold temperatures. But he assured everyone that the live nativity, which has been a staple of the church’s Christmas festivities since 1973, has a farmer on hand who cares for the animals, as well as a veterinarian who makes sure they’re healthy.

Caine also said that it appeared the enclosure had been tampered with.

Apparently the church didn’t want to risk a three-peat, and, after briefly bringing her back to the enclosure, decided to replace Stormy in the nativity scene. But don’t worry, Stormy was brought back safe and sound to Manatawna Farm in Roxborough.

Her understudy (or is it udderstudy?), Ginger, was then brought in as a replacement:

No word yet on whether Ginger will follow in Stormy’s hoof prints and attempt any breakouts, but the Philadelphia police are more prepared than they ever thought they would be:

You know, you start your day saying "well, being a cop is a tough job, but at least I won't have to catch a cow today." But, it wouldn't you know it? You're wrangling a bovine. Then you say, "Well, at least I'll never have to do that again…." pic.twitter.com/EY5K5FkgVd