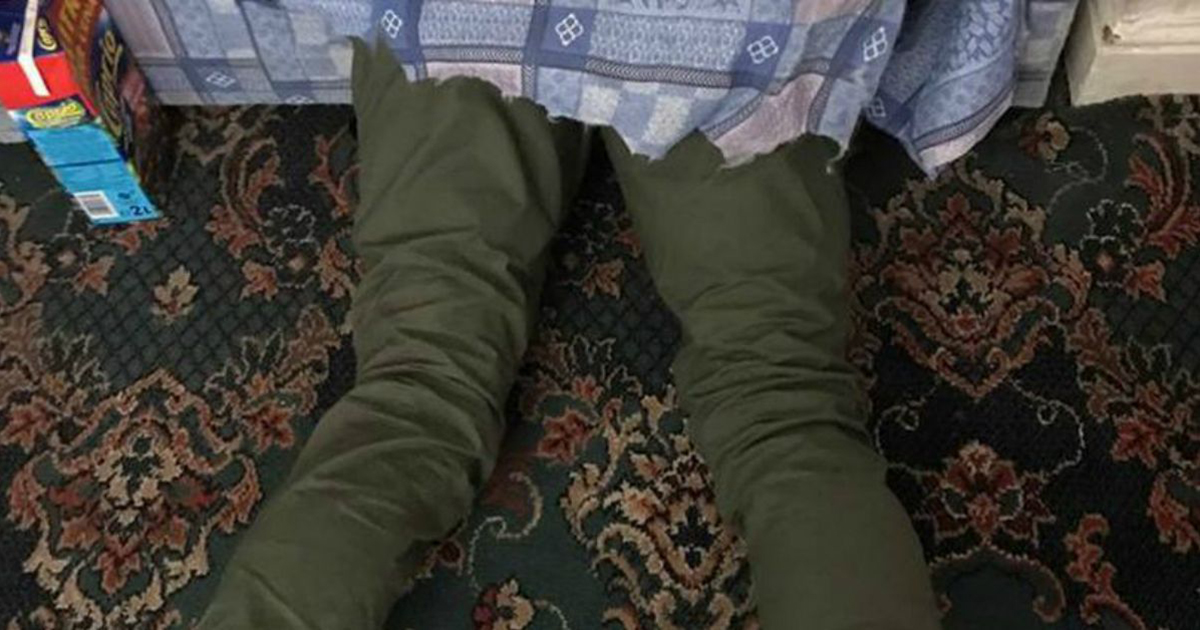 I wish the film featured him playing around with pink, fuzzy fans, but alas, that’s not the case.

Let’s get back to the game and forget about the movie for a minute. When it came to hide and seek, some of use were a lot better at it than others. The more inventive your hiding spot, the better chance you had at not getting caught.

There are some standard spots that seasoned pros knew to avoid: hiding under the bed, for instance, was a total newbie move. As was merely standing in a closet.

Now hiding in your parents luggage in their closet? That’s a pro move. As is pulling down the blanket from a bed that’s pushed against the wall to cover yourself.

This criminal, however, would not fall in that illustrious category of hider, unfortunately. In fact, this woman who allegedly skipped court thought that the best way to hide from police who’d come looking for her was to stand in her bathroom. On a scale. With a laundry hamper on her head.

I wish I was joking.

Female located and arrested for failing to appear at court. It’s all well and good saying “I’ll hand myself in on Monday” – you should have turned up last week when you were told to!!!
She even tried to hide when we saw her but she was far from good at hide and seek #OffToCourt pic.twitter.com/KdCa05PbAr

The story gets better, after cops opened the bathroom and saw the ridiculous sight (thankfully they snapped a photo before slapping cuffs on her) she promised that she’d turn herself “in on Monday.”

She went to jail that Saturday, because, for some reason, officers didn’t trust someone who thinks that standing with a basket over their head is a proper way to elude police.

Unfortunately, she isn’t the only individual who tried to elude police in such a ridiculously bad manner. Remember that bit I said about hiding underneath beds being an amateur move?

Well apparently this one criminal didn’t get the memo.

West Yorkshire police in Halifax easily apprehended the culprit, who many believe was operating under the “I can’t see you, then you can’t see me rule.”


There’s also the tale of one Gregory Liascos, who thought he could dress up as a hill and commit the perfect crime.

Liascos allegedly attempted to break into a museum by breaking through a bathroom wall. After tripping an alarm he ran into the forest and donned a gillie suit. Unfortunately for him, a dog sniffed him and bit down on the sentient piece of earth, causing Liascos to cry out.

Then there was the story of Rawson Watson, who hatched a plot to steal $320,000 from a plane’s cargo system using custom made crates to get both him and the money in and out of the cargo area.

His plan was working, however, he didn’t count on baggage handlers being so rough with one of the crates he was hiding in. They dropped the box, it broke open, and out popped Watson who ran away, without the crate that held his cash.

To make matters worse, Watson couldn’t properly seal the crate he stole the money from, plus he cut his hand on the box he escaped from, leaving a pretty convincing amount of evidence that he was up to no good. That didn’t end Watson’s life of botched criminal attempts, however. He once tried smuggling a ton of cocaine into Europe.

Watson wasn’t the only man who attempted to hide in luggage. Employees at a Barcelona airport cargo area noticed that lots of items were turning up missing. So when a worker saw a man struggling to put an especially heavy suitcase on a cargo bus, they decided to call it in.

No, it wasn’t a sweet suitcase bike, it was a man crammed into a suitcase. Airport workers remarked that the suitcase was “sweating” and warm to the touch. Turns out there was a contortionist inside who was apparently responsible for stealing all of the goodies from the cargo area.

Both him and his partner-in-crime were arrested. Probably the worst part of the whole case is that the sweaty suitcase couldn’t be wiped off, because, you know evidence.