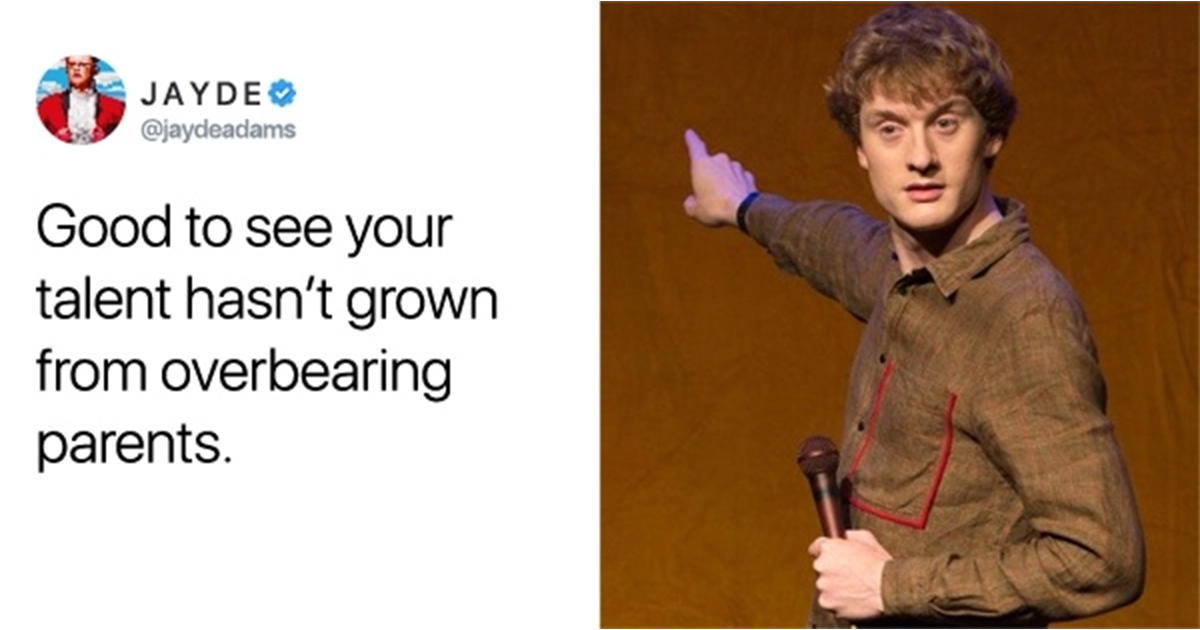 Parents are supposed to love and support you in your career endeavors — but that doesn’t mean they aren’t allowed to give you a bit of sh*t every now and then.

British comedian James Acaster recently shared with Twitter that his standup miniseries, Repertoire, is now available for streaming on Netflix.

My stand up mini series Repertoire is now available to watch on Netflix. Huge thanks to everyone involved in making it, they turned out exactly as I imagined and I couldn’t be happier.

English comedian and TV personality Richard Osman heartily endorsed the miniseries on Twitter, encouraging everyone to watch it.

The James Acaster specials on Netflix are spectacularly good. He is a once in a generation comedian, and I can’t think of anyone who wouldn’t enjoy them. Give yourself a bank holiday treat.

However, things started getting a little odd when someone named David Acaster thanked Osman for his support.

Thank you Richard for this ringing endorsement. (It was a pleasure to meet you and Sunny in Edinburgh last August.)

Much to Twitter’s delight, David turned out to be none other than James Acaster’s father.

However, it was David’s comments about his son that really got Twitter’s attention — specifically, that he’s “not for everyone” but that he “is original.”

Thanks man. He’s not for everyone but he works hard, is original and is building a following. There’s no better introduction to his work than the Netflix specials.


Wow. It’s rare that you get to see the subtle and elusive Dad Burn out in the wild, but when you do, it’s a delightful experience.

James definitely picked up on his dad’s backhanded compliment, wearing it with pride and a hint of chagrin.

“He’s not for everyone but he works hard” – my actual father https://t.co/SJIX9h1Q1X

Fellow comedians found the whole thing to be hilarious, and wasted no time in giving James grief.

That is my mum though

And hey — who says that you have to be “for everyone,” anyway?

The best kinds of people are the ones not for everyone.

David stood by his “compliment,” proud of his son’s “distinctiveness.”

Thanks Erica – that’s exactly what I meant. Not generic, distinctive.

Nobody knows how to zing you quite like your parents. (Especially when they’re well-intentioned.)

The post Comedian’s Dad Gives Him A Masterful Back-Handed Compliment — And Twitter Is LOLing appeared first on Woke Sloth.