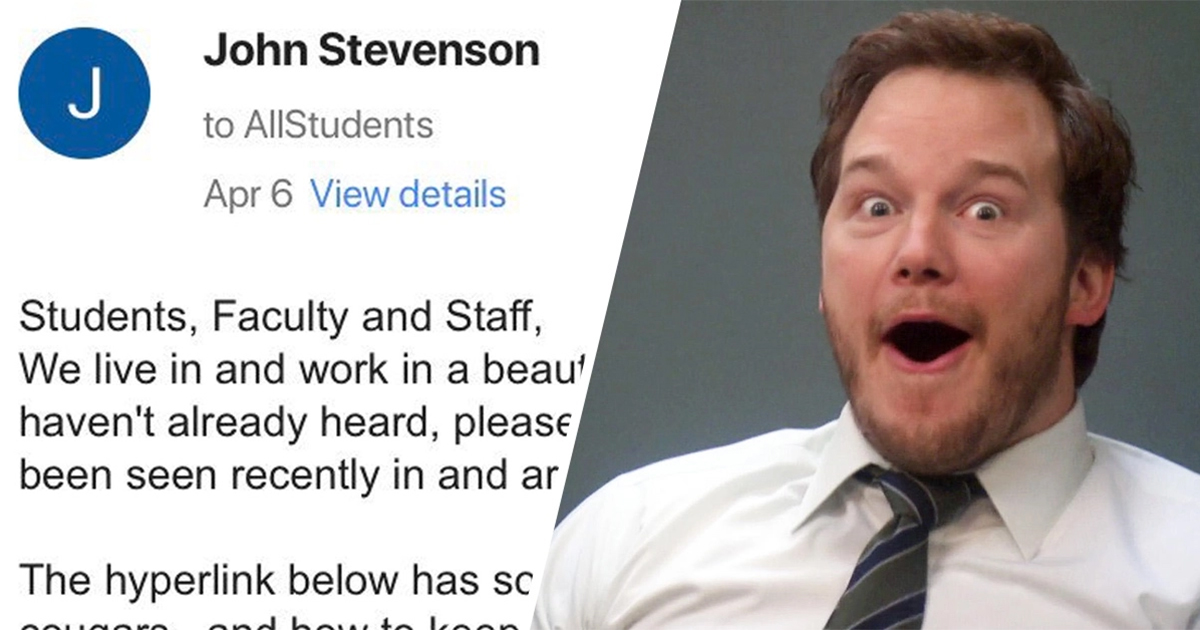 At some point, you’ve probably cringed over accidentally hitting “reply all” to an email thread — however, it’s unlikely that you’ve found yourself in the same embarrassing email thread situation as this flippant university student.

Recently, Southern Oregon University sent out a message to its student body, warning them about recent cougar sitings near campus, and informing them about how to take the necessary precautions.

Caleb Diaz, a 23-year-old student at the university, decided that the opportunity for a cougar joke was too perfect to miss, and responded to the email saying “That’s just my mom.”

However, Diaz didn’t realize that he’d accidentally replied to the ENTIRE STUDENT BODY. “I didn’t think that I sent it to the whole school,” he told BuzzFeed.

However, once his fellow students got ahold of Caleb’s email and posted screenshots to social media, there was no stopping his unintentional rising star.

People were honestly impressed that someone would have the gall to send that kind of response to an official school email. (And people were especially impressed when they thought Diaz had sent the message to the entire school on purpose.)

I wouldn’t dare send it to my entire school. That deserves praise

my mom is impressed pic.twitter.com/fxSKZEZFOU

Of course, people were also a bit concerned about Caleb’s mom and hoped that she had a decent sense of humor about being used for her son’s sophomoric jokes.

Everyone who pull-up next to his mom in town like pic.twitter.com/2lglpH0Psa

Oh his mom better have a great sense of humor… or his ass is toast pic.twitter.com/QM4sd2HXHK

Fortunately, Caleb told BuzzFeed that his mom was actually pretty chill about the whole debacle. “Her first reaction was, ‘Oh my god, I’m only three months older than your father.”

Of course, some people are already plotting all sorts of mischievous deeds, now that they know it’s possible to “reply all” to the entire school.

My favorite part of this is the future shenanigans that will pop off now that students know they can spam the whole school in one go. https://t.co/sIZDlq1hHS

However, Joe Mosley, a spokesperson for Southern Oregon University, says that isn’t likely.

“All-student emails on our campus are moderated,” Mosley tells BuzzFeed. “This student’s response normally would have been blocked, but in this case, it slipped through — and we’re happy so many people got a good laugh out of it.”

“My only response is that a good sense of humor is valued at SOU and we appreciate a funny joke as much as anyone,” Mosley added. “Hopefully this student’s mother will have the same attitude.”

The post College Student Accidentally Sends Embarrassing Email About His Mom To The Entire School appeared first on Petty Mayo.