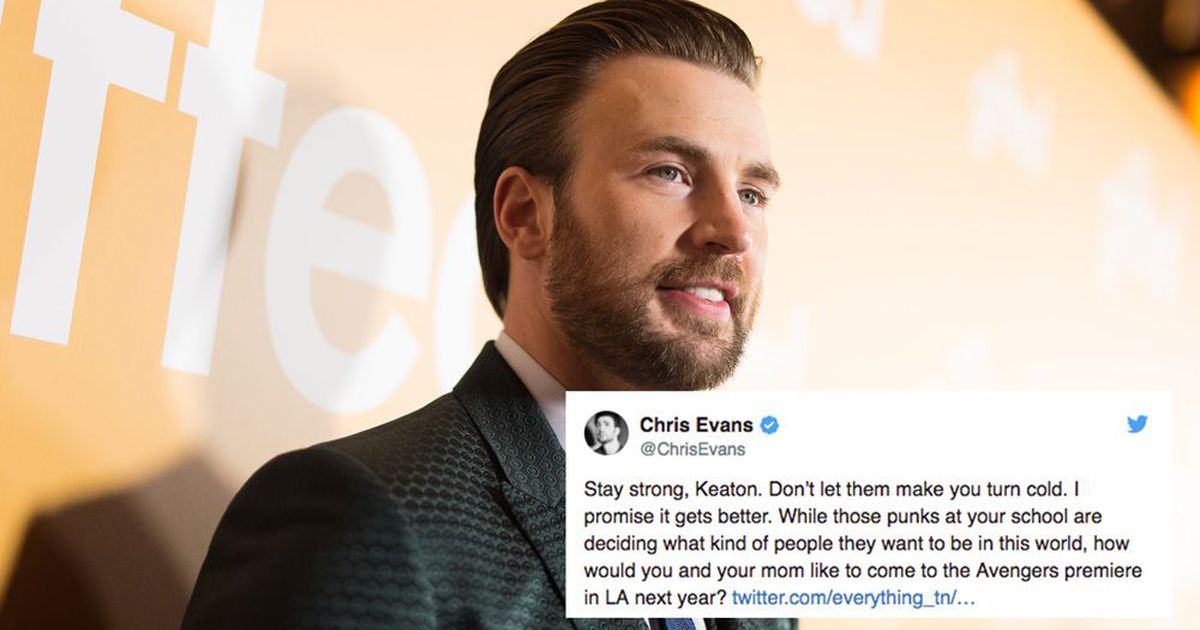 By now you might’ve heard of middle schooler Keaton Jones, whose teary video details what bullies at school do to him.

Well, it’s been a wild and heartwarming 24 hours. The video has racked up more than 20 million views and support from thousands of people, proving that maybe all of humanity isn’t terrible.

Here’s the upsetting video, if you haven’t already seen it:

Many of that support comes from celebrities too, who’ve offered up chances to hang out with them. Like, oh, Chris Evans who plays Captain America/Steve Rogers, with an invitation to the Avengers: Infinity War premiere next year.

Stay strong, Keaton. Don’t let them make you turn cold. I promise it gets better. While those punks at your school are deciding what kind of people they want to be in this world, how would you and your mom like to come to the Avengers premiere in LA next year? https://t.co/s1QwCQ3toi

Hulk, played by Mark Ruffalo, joined in with an offer for Jones to go and hang with him too.

Keaton, will you’ve my guest at the Premiere of #InfinityWar too? I think you are about one of the coolest kids I have ever seen! Can’t wait to meet you in person, pal. Forget those ignorant kids. One day, very soon, they are going to feel pretty stupid for this. https://t.co/BqJLxu25GN

It certainly looks like Jones is going have a pretty busy year ahead, meeting all these famous people.

Meet Keaton Jones a very smart little boy who is being bullied at school. This video is heartbreaking!! I want to bring Keaton to Vegas and hang out at UFC Headquarters. If anyone knows how i can reach the family please let me know. Thank u everyone pic.twitter.com/BR8c4ldDFc

Hey Keaton Jones, I’d like to invite you to be my guest at any show of mine of your choice. I’ll cover ur flights and accommodation.
Big up for speaking up, buddy!!! 👍

Hey Keaton, unfortunately you aren't alone. A lot of kids are bullied, but they will be so uplifted by your courage. You're a hero, young man. You are treasured and valued. Let me know if you'd ever like to visit ESPN. You can be my special guest. https://t.co/N8mkUTYnEy

Of course, as many people have pointed out, there are plenty of bullied kids like Jones who won’t ever get the same attention from celebrities — but need our support.

There are so many kids like Keaton. Most of them won’t hear from celebrities. Most won’t be invited to movie premiers or football games. But we can all do our part to see people, to step in and show up and respond in love. Your life matters. Your voice matters.