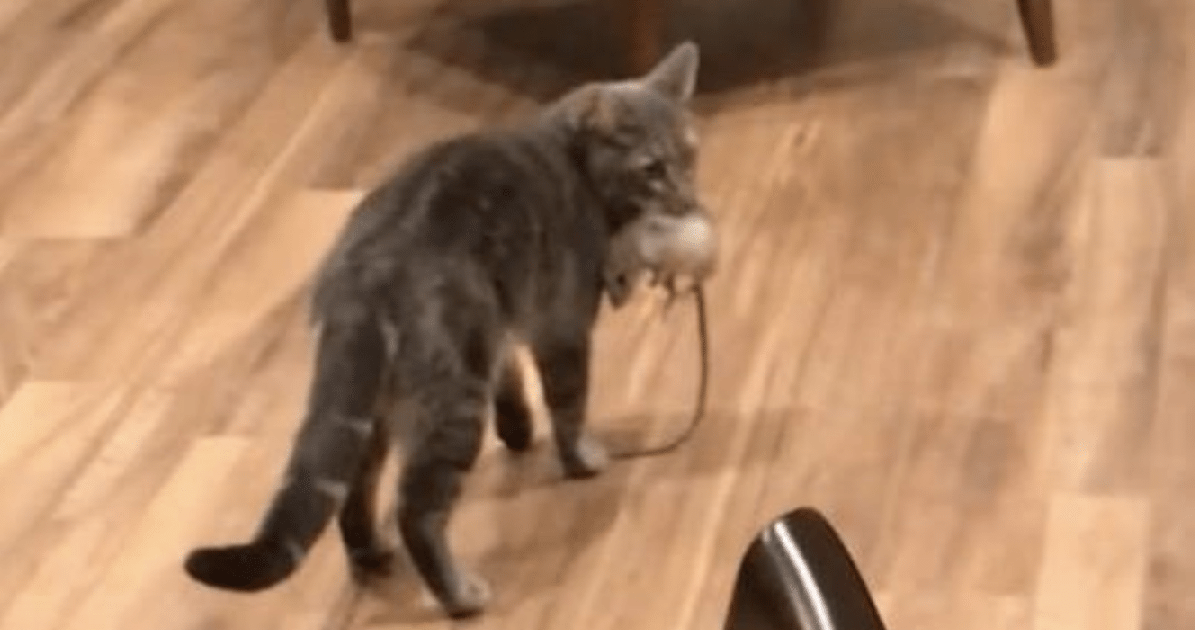 Cat owners know their furry friends can be great at keeping mice and rats away. Since I can’t stand either of them, that’s a major plus of felines. However, the downside is that cats may want to “deliver” you their prey.

When cats make a kill, whether it’s a rat, chipmunk, or bird, they tend to be pretty proud of themselves and live under the delusion that their owners would like to see proof of their good deed.

It’s one thing if the carcass of a dead animal is left outside in the yard for you to stumble across, but what would you do if your cat decided to bring their prey inside the house and perhaps worse yet, it was still alive?

That’s exactly what happened to Jessica Gottlieb of Los Angeles when her cat, Broccoli, brought a real live, rat into her home. Yikes! Luckily for us, Gottlieb caught the entire terrifying incident on video.

Warning: there is some profanity ahead.

OK, a lot of profanity! You’ll have to excuse Gottlieb’s language when she realizes what exactly she’s dealing with. Check out the video, which Gottlieb aptly titled, “I’m going to set my house on fire,” below:

I’m going to set my house on fire.Update: Here's how the saga ends http://jessicagottlieb.com/2018/01/whatever-happened-broccoli-rat/

As Broccoli nonchalantly carried the live rodent upstairs, Gottlieb and her daughter are understandably distressed, and unsure of how to stop him. When Gottlieb realized that the rat is, indeed, alive and her cat was playing with it, the revulsion in her voice was palpable.

‘The Worst Cat Ever!’

Broccoli eventually released the rat, which allowed it to escape under the door and into the linen closet, which lead Gottlieb to proclaim, “He’s the worst cat ever!”

But, Facebook users came to poor Broccoli’s defense, despite his perceived mischief.


One Facebook commenter even thought Broccoli’s gift was a bit of revenge.

But others viewers were right there with Gottlieb: totally grossed out.

One commenter knew exactly what would happen to poor Broccoli after his stunt.

Still another said the video reminded them a classic cartoon.

When In Doubt, Zap It

The video ended with no resolution, but later, Gottlieb took to her blog to give everyone an update on what happened with the rat.

The family sealed off the bedroom doors and hoped that their other cat, Sparky, who has killed a number of rodents in her day, would deal with the rat.

When there was no dead rat in the morning, though, Gottlieb set some snap traps. Unfortunately, that didn’t work either.

They turned to an electric trap, The Rat Zapper. That finally did the trick, and Gottlieb’s husband, who had been out of town for all the madness, returned and deposited the now deceased rat in the trash bin.

Here’s hoping Broccoli does not pull a stunt like this again!