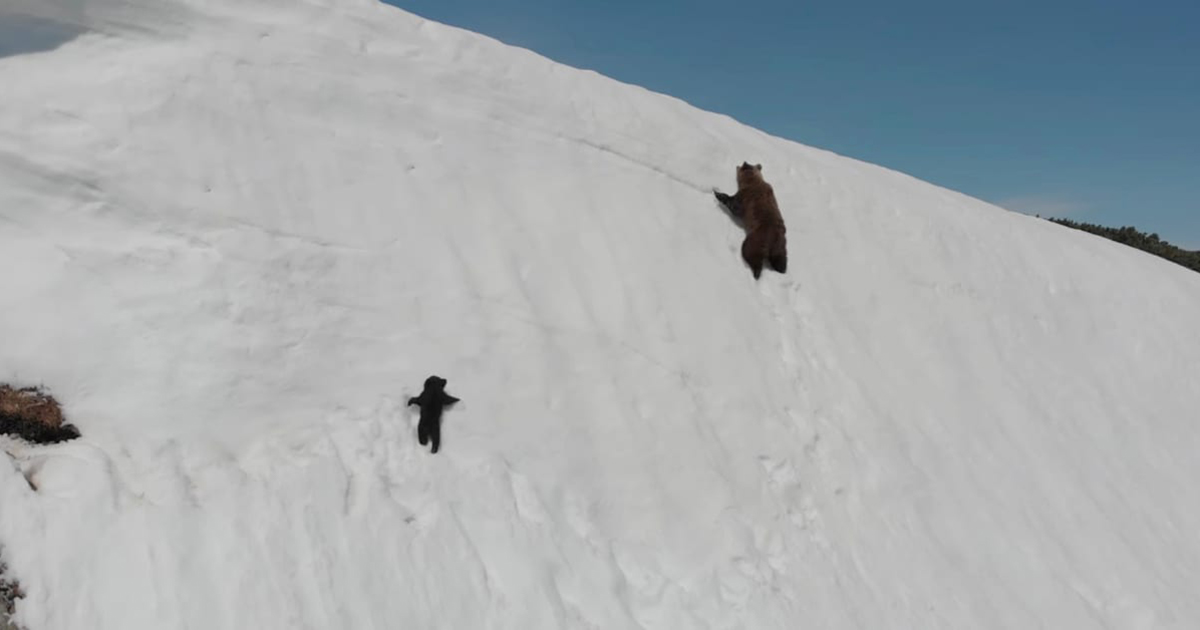 “If at first you don’t succeed, try and try again.” Strong words to live by, but sometimes it can be pretty tough. Especially when the thing you’re attempting is potentially life-threatening. Check out this little bear cub climbing a cliff with her mom.

In this video, we see a little bear cub and her mother on top of a cliff. Bravely (and dangerously) we see the pair wandering across the steep cliff edge.

You can see the little bear’s mother leading the way across the sheer face of the mountain through the snow while the little creature follows behind cautiously. The encounter took place in the Magadan Region of Russia.

However, at a few points, we see the bear cub getting a little giddy and she starts to slip through the snow as she bounces across rather quickly. Because of this, we can see the mother starting to get distanced from her cub, not knowing that she’s starting to fall behind because her little paws can’t grip the snow as much.

The bear cub climbing the cliff started to lose grip

As the mama bear soldiers on to try and lead the way for her cub, we see the little bear start to lose stamina and she clings to the cliff wall hoping not to fall.

Then, the little bear cub slips and we see her skidding down the snow at some serious speed. Thankfully, she manages to regain her strength and grip onto the cliff edge before falling right to the bottom.


The bear climbs back up the snowy cliff to reach her mom. But just before she gets to the very top, she starts to slip again. The mama bear reaches out a paw to try and catch her baby but it was too late. The little bear starts sliding right back down the mountain.

Thankfully, the little cub managed to cling onto some exposed rock. But again, she wasn’t giving up hope yet. The little cub climbing the cliff refused to give up and she successfully made it back to her mama.

And just like that, the two were back on their way. Talk about an inspirational little fighter!

Don’t forget to watch this little bear cub climbing a mountain with her mama in the video below. Also, we love hearing all of your opinions. So please let us know what you thought of the article in the comment section.