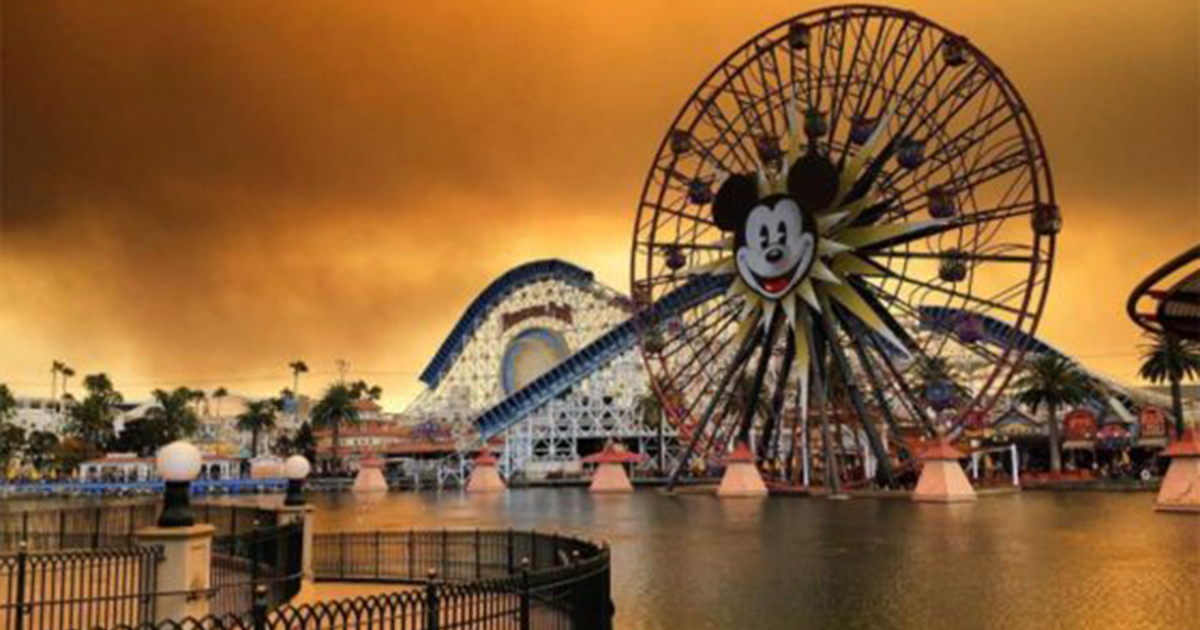 Disneyland visitors captured some rather eerie photographs which are showing the horrifying scope of the wildfires burning in California. With already ten people dead and the death toll expected to rise even higher, there seems to be no relief in sight for the Golden State.

Fifteen wildfires are currently raging across Northern California. According to the authorities, the fires have burned over 1,500 homes and businesses and killed at least 10 people, with that number expected to grow. The fires ignited Sunday night and Monday and spread with alarming speed because of dry conditions, Cal Fire Director Ken Pimlott said at a news conference. According to CNN, more than 20,000 people evacuated, some with little notice. In addition to the destroyed structures, the fires have burned through 57,000 acres in eight counties.

And the pictures are painting a terrifying tale for those who reside near these fires.

View from my sisters home right now. Praying this fire does not jump to their track #anaheimhillsfire pic.twitter.com/cUrtUsI40K

Meanwhile, in Anaheim, Southern California, photos have emerged showing visitors at Disneyland, bathed in an eerie orange glow as nearby fires began to take hold. The park remained open whilst nearby residents were evacuated from their homes. Disneyland, though safe from the blaze, looks pretty strange when lit by the smoke and ash of the devastating wildfires.

@Disneyland looking surreal with #canyonfire2 burning in the distance pic.twitter.com/gaVpOrwXw1

IFL Science also reported that visitors to the theme park have reported ash falling on them as they try to enjoy their time in the eerily lit park. “The sky makes me feel like I’m on another planet,” one visitor wrote, posting a picture of the sky above one of the attractions. And it sure looks like a dystopian future or a Halloween advertisement in the photographs.

Disneyland will stay open, though it posted to Twitter today that: “Due to wind conditions continuing into this evening, ‘Remember… Dreams Come True’ fireworks has been canceled.”

The LA Times reported that nearly 5,000 homes were evacuated as the fire spread rapidly. Residents are unlikely to be able to return home today, as the California Department of Forestry and Fire Protection attempts to bring the blaze under control.