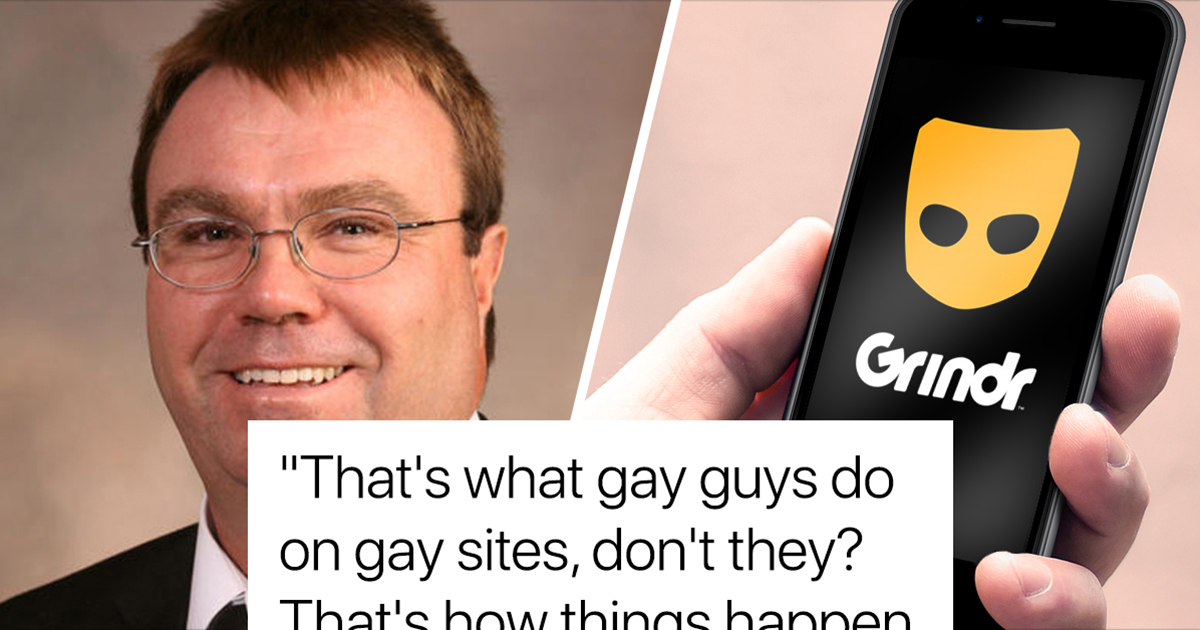 Hypocrisy may be a given in politics, particularly where the GOP is concerned, but one recent Republican legislator’s hypocritical actions have raised the bar exponentially. Randy Boehning, a 52-year-old North Dakota legislator, voted against a bill which would protect individuals from discrimination based on sexual orientation in April of 2015. Shortly thereafter, it was revealed that Boehning had been an active participant on the all-male hookup app, Grindr.

Republican Rep. Randy Boehning of the North Dakota House, a strong and loud Antigay lawmaker caught on Grindr (a GAY app) kindly asks for your vote in his re-election campaign https://t.co/EeV57kWyNB

Boehning (whose Grindr profile read, “Seems I haven’t found mister right yet, so need to keep looking for and having fun on the way! Hit me up boys”) was discovered to have sent explicit photos of his genitals to other men via the app. When the photos were leaked to the press, Boehning initially claimed that it was the act of a political rival. However, Boehning eventually came out the closet, saying, “The 1,000-pound gorilla has been lifted,” and, “I have to confront it at some point.”

When confronted about sending unsolicited, explicit photos to other Grindr users, Boehning’s excuse was: “That’s what gay guys do on gay sites, don’t they? That’s how things happen on Grindr. It’s a gay chat site. It’s not the first thing you do on that site. That’s what we do, exchange pics on the site.”

The whole thing seems wildly hypocritical, considering Boehning voted down Senate Bill 2279, which would have offered anti-discrimination protection for gay people. But, of course, Boehning had a tepid excuse for his hypocrisy. As the Washington Post reports:

Boehning quibbled with the language of the proposed legislation, which would have protected people “perceived” to be gay. But he also said he voted against his own self-interest because his south Fargo constituents would want him to.

And, even after this debacle in 2015, Boehning is still running for re-election this year and has received the endorsement of North Dakota’s Republican party. Boehning claims his anti-LGBT voting history is actually an asset to his constituents, saying “That is why I’m running once again. I will continue to be a strong voice for the residents in my district.”

When asked if the photo scandal would affect his campaign, Boehning replied “I don’t know. I guess we’ll find out.”

Boehning spoke about the upcoming election to local radio host Rob Port earlier this week, and Port took to Twitter afterward to recap the conversation.

State Rep. Randy Boehning, who admitted to sending unwanted, explicit pictures of himself to a man on Grindr, just told me on @970WDAY that "the only thing Grindir is good for is making sausages and hamburger." #NDPol

I also asked Boehning if there were any other incidents where he sent people unwanted, explicit pictures of himself. He refused to answer. #NDPol

While this story is a depressing example of someone voting against their own values in an attempt to garner acceptance (and could certainly paint Boehning as a sympathetic figure), it’s also important to remember that if Boehning is elected, he has essentially pledged to continue voting down pro-LGBT legislation.

Sure, it’s sad that Boehning feels the need to vote against his own self-interest — but he’s certainly not the only gay person in North Dakota who will be affected by his regressive voting record.

The post Anti-Gay Rights GOP Lawmaker Who Was Caught Sending Explicit Pics On Grindr Is Running For Re-Election appeared first on YesPlz.