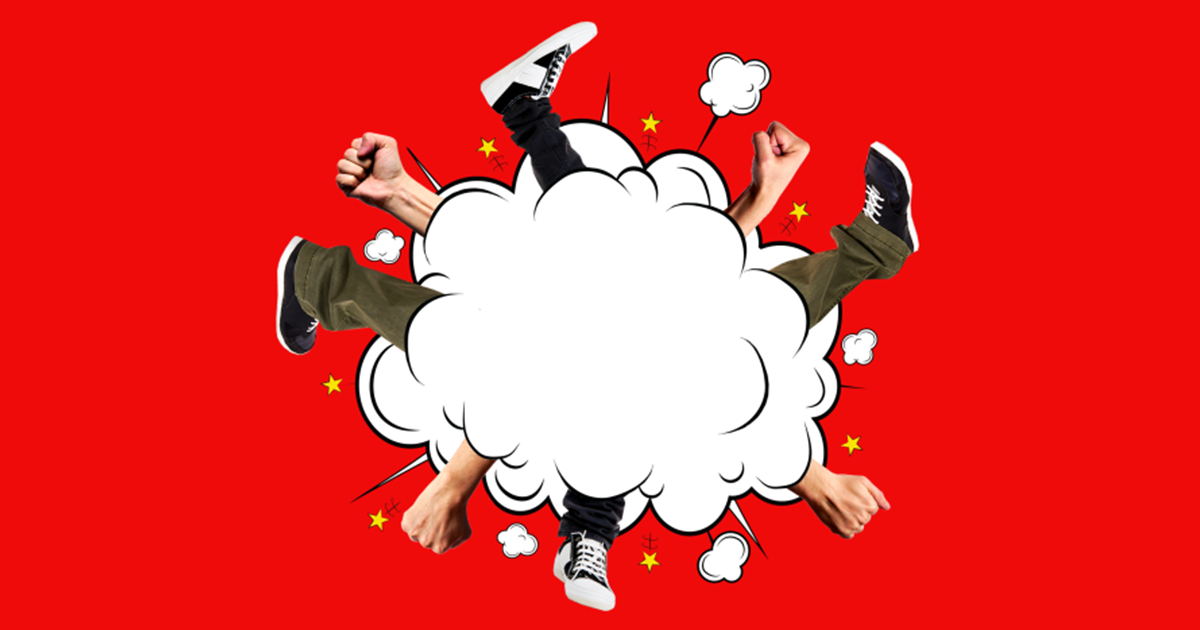 
When I was in middle school my class went on an overnight trip to Spanish camp, which I remember vividly for two reasons. First off, I farted so loud in the cabin one night that one of the counselors woke up and yelled at me for farting so loud. Secondly, I got into a fight. Now I use the word “fight” here generously. Every fight I’ve ever been deserves to be classified as an “altercation” or a “skirmish” or a “pathetic attempt at a throwdown.” Anyway, there was this kid Stan (not his real name) who I hated for reasons that now escape me. I’m sure he’s a perfectly lovely adult man these days. But back then, I did not like Stan. I think I thought he was a social climber, which is amusing because A) I was ALSO a social climber, and probably just angry that Stan was better at it, and B) “social climber” is such an ‘80s epithet that it belongs on display in the Smithsonian.

So one day at this camp, I was so mad at Stan for being Stan—like, genuinely and irrationally seething—that I walked up to him from behind and hit him. A cheap shot! DISGUSTING. A true preview of my future career online. Stan turned around and smacked me back and then we fell on the ground, doing that teen thing where you roll around in the dirt like idiots before people break the fight up and you start crying. And when we finally get back on our feet and start sniffing up angry boy snot, Stan raises a finger to me and he goes, “You better watch your back, Magary! Because I got a lot more friends than you, and if it comes to that I’m gonna kick your ass!” I’m not really sure what that means, but he DID have more friends than me, and that was really the main point to get across.

Afterward, half the kids called me a cheap-shot artist (no arguments there), and the other kids told me they hated Stan and that he got what he deserved (probably many arguments to be made there). Again, I cannot think of a more fitting omen for the coming online discourse. If you’re hoping karma ever paid me back for that bush league move, please note that a football teammate of mine once jumped me and smashed my head into the floor multiple times. Violence-wise, I have come out more than even in life.

But I am far from the only person here to get into such kerfuffles. Turns out that Deadspin readers and staffers also occasionally struggle with actual human interaction. I’m as shocked as you are. Here now, scavenged from the blood-stained dirt of Twitter, are some of your best worst fight stories.

I beat another kid at camp at Mario Kart on N64 when I was 12. He got so angry he punched me out of a chair. He’s a pastor now.

once in college a girl threw a beer on me and shoved me because i was counting things like the count from sesame street ("one, two…two beer pong balls, ah ah ah"). it was probably pretty annoying.

In Kindergarten, one of my best friends wouldn't share the paste, so I threw him on the floor and bit him in the face.

Kid challenged me to a fight over where my friend group was sitting at lunch. When it came time to fight after school, he said his mom had called and told him it was “meatloaf night” so he had to go home. My friends called him “meatloaf kid” for the rest of the school year.

One summer afternoon during our high school years, I was lounging on the couch watching TV, minding my own business. My brother puts a bagel in the toaster, takes it out, and places both scorching hot bagel halves on my nipples.

In 8th grade I fought a kid nicknamed Poo. I hit him first with what I was sure was enough force to launch him into orbit, only to find he was still standing in front of me completely unfazed. He bounced my head off a concrete wall & broke my glasses.

I intentionally set a moving screen on a teammate & he got super-pissed & suplexed me on the spot & the training staff went into PREVENT PARALYSIS mode and wheeled me out & I thumbs-up’d to an empty arena, during practice

A girl made fun of my outfit so I shoved her, then she hit me over the head with her stiletto and the paramedics glued my scalp back together. then I finished my half-gallon of monarch vodka

Street fair in foreign city. Bought nunchucks to give as a gift to a friend. Walking around later, got mugged. Traded punches with the guy while I was holding nunchucks in a bag in my off-hand. Blew my only chance to actually use nunchucks.

Once was feeling extremely liquor strong and told a kid in front of the bar to “break it, it’s glass” while pointing my jaw at him with my hands down. Thought he wouldn’t call my bluff. Woke up a few moments later in my ex’s lap w a softball jaw and the entire bar laughing at me.

In 6th grade, I told my friend Vanilla Ice ripped off Queen with Ice, Ice, Baby. He proceeded to punch me in the mouth. I carried on as if nothing happened. #nothingtoseehere

Junior year of HS. Guy starts talking disrespectful smack about my recent ex gf. I took exception. We both had black eyes for the yearbook that year. He’s a fancy lawyer now and is on my list of people to call for a campaign contribution this week. How much should I ask for?

In High School I took “Basketball” which was just a class of organized open gym. I blocked one of the kids shots (he was on the actual basketball team) & asked “if he wanted turkey with that stuffing.” He immediately threw the ball at my head & we had to be separated by the coach

At University of Maryland and I saw a guy who looked like Tim "The Toolman" Taylor and his friend who looked like Al Borland. I told them this fact. They told me not to say it again. I said it again.

In middle school before classes started, a fight broke out in the middle of the hallway. One of the kids threw a juice box into the crowd which hit me right in the eye. To save face, I started wildly swinging at the boys before running to the bathroom crying.

I was in a 711 and a drunk guy got up in my face and I literally said “I don’t want trouble” (like I was Jackie Chan!) and he said “you ain’t doin shit!” and I hit him as hard as I could in the jaw and he was KOd & he fell into a rack of Cheetos and Fritos and made a mess ✌️💪

My little brother asked me if I wanted the last slice of bologna. When I walked over he licked it. I bounced his head off the table. My parents were furious

Turned around to see some guys, all wearing matching scarves, shoving a friend. Felt like someone needed to point out the scarves, so, thinking quickly, I yelled “why doncha go back to scarf town!”

one time i got in a confrontation outside a pizza place at 2 am. took my shirt off and burned a cigarette on my chest while staring at the guy. he backed off. was very drunk.

I don't remember how it started, but a brief fight I got into in high school ended with me slapping a chocolate pastry right onto another kid's back. I thought, hah! Now your shirt is stained with chocolate! That will teach you to mess with me!
We never fought again so it worked?

When I was in 8th grade the school bully tried to rack me on the basketball pole (a favorite move of his) and I kicked him in the nuts so he unleashed a barrage of face punches on me, in front of half the kids’ moms in the parking lot. We were both suspended and he’s a cop now.