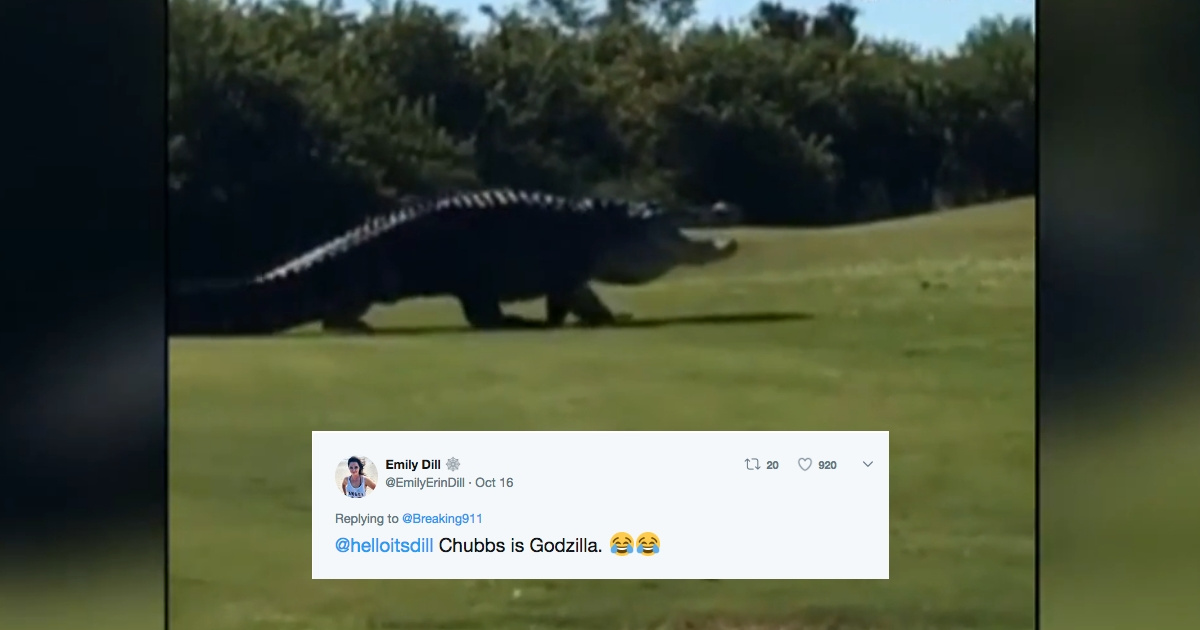 No offense to any Floridians reading, but it is a well-known fact that Florida is the most terrifying state in the union, on the basis that it is literally full of Burmese pythons and I am never going to Florida again, never ever amen.

Now I hear what you’re saying: “God, just stay away from the Everglades you coward, it’s FINE,” and first of all, watch your tone. Second of all, okay sure, avoid the Everglades. EXCEPT THERE ARE ACTUAL DINOSAURS ROAMING FLORIDA’S SUBURBAN GOLF COURSES.

Where in Florida is safe, I ask you?!

Sure the lamestream media will tell you that’s just a very large “alligator” but I’m calling FAKE NEWS. I have eyes, and I went to the science museum’s animatronic dinosaur exhibit twice in elementary school. I know a stegosaurus when I see one.

Floridians have nicknamed this guy Chubbs, because to be fair a name like “OH MY GOD WHY IS THERE A LITERAL DINOSAUR ON THIS GOLF COURSE” is impractically verbose. He showed up at the Buffalo Creek Golf Course in Palmetto, Florida last week and is taking the internet by storm again.

Yes, “again,” because this isn’t the first time he’s been sighted: he first made a splash all the way back in 2016, which means Floridians have spent two entire years just sharing Florida with a dinosaur. You know, like you do.

Golfer Sage Stryczny captured good ol’ Chubbs while golfing with his dad the other day. “He was a beast,” he told Tampa NBC station WFLA. “Me and my dad were about to hit off the tee on a par 3 and we saw him lying right on the green.” He added that it seemed as if Chubbs was en route to a different pond and just needed a rest along the way, which is just entirely too humanizing a portrait for my taste, but fine.

When Chubbs first appeared in 2016, a clerk in the course’s pro shop, Wendy Schofield, told NBC station News 3 in Las Vegas that, “He doesn’t bother anybody and they don’t bother him,” which LOL is exactly what he WANTS you to think.

Anyway, as you might expect would happen when a dinosaur turns up on a putting green, the internet has lost its mind over ol’ Chubbs.

That is a long lost dinosaur

I've had this gif saved for years and just now found a use for it pic.twitter.com/kZ2lDs5b5C

Chubbs is always making the news! 😅😂 I live 2 minutes from this golf course.

(Ed. note: I’ve DM’d this person with just the word “WHY” but as yet he has chosen not to comment.)

We need to slice Florida off from the rest of the US.

Chubbs looks like he requires human sacrifice once a year lol

I dont know a lot about reptile aging, but I think Chubbs here may have seen the beginning of mankind, and will live to tell his children of our demise.

In conclusion, here’s Chubbs trying to eat an entire flock of vultures or something: