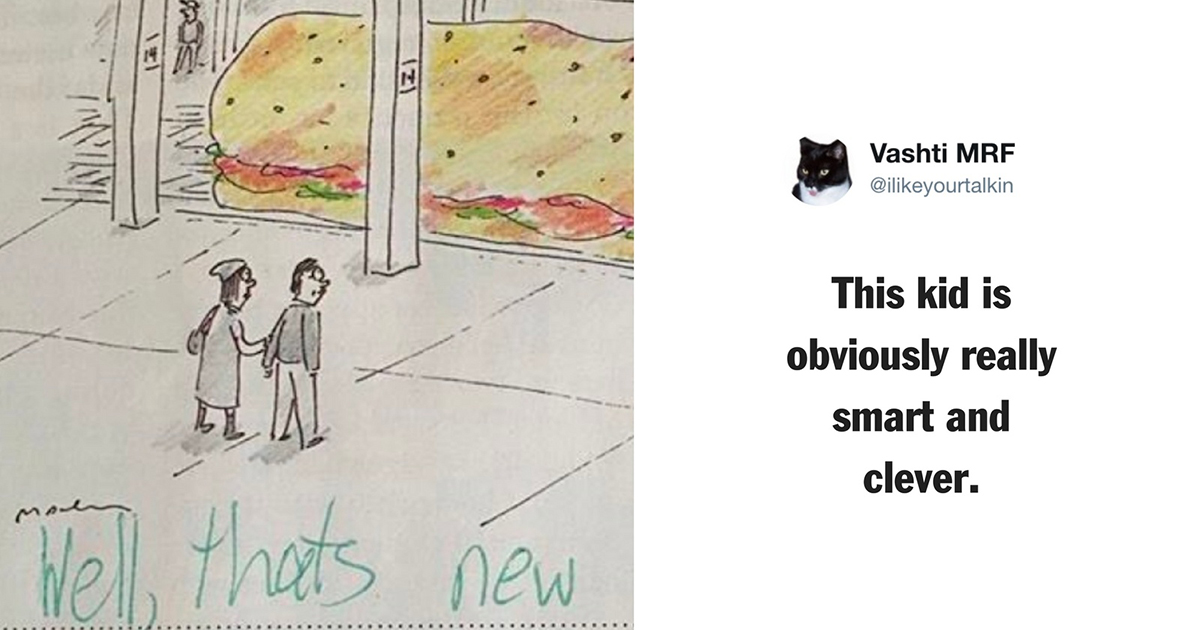 There’s a new comedian in town taking the Internet by storm, and she’s only 9-years-old.

A screenwriter based out of Los Angeles, Bess Kalb, tweeted pictures of New Yorker magazine cartoons on Thursday that were captioned by her cousin’s young daughter, Alice.

“Everything is terrible but my cousin’s 9-year old daughter Alice has been quietly and masterfully slaying the @NewYorker ‘s caption contest and it’s pure delight,” Kalb proudly wrote and shared the budding brilliance of Alice’s knack for humor.

Everything is terrible but my cousin’s 9-year old daughter Alice has been quietly and masterfully slaying the @NewYorker’s caption contest and it’s pure delight. pic.twitter.com/Lhzmq7Pnsb

In one of the illustrations, a New York rat that is apparently envious of pigeons’ airborne abilities, fashions itself a pair of faux wings and prepares to take flight off a building. A stoic pigeon observes the determined rodent. Alice captioned the illustration with the bird asking, “You ok there buddy?!”

No joke…at least 4-5 times I have had "you ok there buddy?" pop into my head and it's made me chuckle every time. There's something about dry humor mixed with a pinch of absurdity that gets me every time. Cheers, Alice.

Kalb said there’s plenty more where that came from. The young girl manages to get to the magazines before her mother so she could caption all the drawings.

There are so many (she grabs every issue before her mom can get ahold of it) and every single one of them is perfect.

There are so many (she grabs every issue before her mom can get ahold of it) and every single one of them is perfect. pic.twitter.com/vsnG2unIbN

Kalb shared Alice’s previous works. “Vintage Alice from 2017. I think you’ll like her earlier work. (She asked for a collection of EVERY cartoon with the real captions removed).”

From last year. The best one. pic.twitter.com/UzUgwQzGB7

I love it because without even realizing it, Alice has made a commentary on “bigger = better” consumerism that’s smarter and funnier than 100 online think pieces. She just had the salesman say what it naturally occurred to her he would say. 😂👍🏻

I would pay money to have Justin mentor this little girl. Especially after this one: pic.twitter.com/b3ErcJEo9i

In another illustration, a man is smoking a cigarette and witnessing an active bird bath in inside his coffee cup. Alice put her stamp on this one with, “omg, every thing is going rong!”

Yet, everything about it is so right.

these are hilarious… I had to walk out of the office when I read " OMG, Everything is going RONG! LOL!


People loved Alice’s penchant for wit. One user commented, ” She is funnier than 99% of Twitter” while another wrote, “This girl’s talent is comic gold. @NewYorker get this girl a gig!”

How the hell can a kid be so risibile with such dry humor? How can a kid have dry humor at all?

Your genetic kung-fu is strong.

According to the Sydney Morning Herald , Kelb is an Emmy-nominated writer for Jimmy Kimmel Live and The New Yorker ‘s Daily Shouts section. She was thrilled for the supportive responses on the Internet and credited Alice for all the work. “I am a professional joke writer for a professional TV show and I truly can’t touch any of this. Thank you for being as obsessed with Alice as our family is!”

Could Alice be making her comedic debut soon?

People would buy her books.

I would buy that book in a heart beat. Let’s make this happen

Ellen DeGeneres admires young talent and features them on her show. It might be time for the talk show host to meet a fellow comedian.

You realize this little girl needs to be on the Ellen show, right?

Why not give her a periodic spot as a caption writer?

I sincerely hope @TheNewYorker gives her a periodic caption-writing spot.

Alice’s mom, Kim Kassnove, tweeted that her daughter is becoming keen to her viral fame. “She refuses to take off her sunglasses indoors, called me ‘toots’ and asked me to order her a tuna roll with quinoa for dinner. We’re in trouble.”

She’s definitely a character off the page and at home as well.

Aside from her flair for comedy, Kalb also mentioned that her second-cousin is a wonderful little girl. “Teachers don’t always encourage creative writing, so today has been a huge shot of confidence for her,” she tweeted. “Let young girls know when they’re funny and smart. Many people don’t.”

Alice is an incredible kid. She loves her little brother and @HamiltonMusical (she knows EVERY lyric). Teachers don't always encourage creative writing, so today has been a huge shot of confidence for her. Let young girls know when they're funny and smart. Many people don't.

Alice is so lucky her amazing, hilarious mom @kimkassnove recognizes and celebrates her for trying (DILIGENTLY) to be funny. It's exhausting to beat this drum, but comedy writing is an overwhelmingly male-dominated enterprise. Look through Emmy nominees for talk and sketch shows.

Sometimes there are more Joshes and Daniels on shows than all women combined. This is a startlingly frequent and real thing. I've talked to a lot of other female late night and comedy TV writers and many of us never wrote or did comedy in school because that was for the dudes.

Female writers of Parks and Rec, Silicon Valley, SNL, Fallon, and Kimmel DID NOT DO COMEDY in school because we were either rejected from male-run comedy behemoths (The Harvard Lampoon) or just were given enough cues growing up to just keep our heads down and get good grades.

This could happen to Alice very easily, even with supportive parents. Her teacher ALREADY TOLD HER not to get "fancy" with her writing this year. Middle school boys don't want to date girls who can get bigger laughs than them. So we adjust to fit everyone's expectations.

The only reason some of us get a chance to do comedy professionally, and the actual reason I got into comedy when I applied to Kimmel six years ago, is someone recognized and amplified my voice. In my case it was @NellSco. She said "You're funny." That changed my life.

When a 9-year old girl is fucking funny, tell her. When she turns 15, remind her. Daniels and Joshes and Mikes and Joes and Peters (TRULY HIGH FREQUENCY COMEDY NAMES) are told that constantly. Boys get to use comedy to get through high school. Girls often have to hide it.