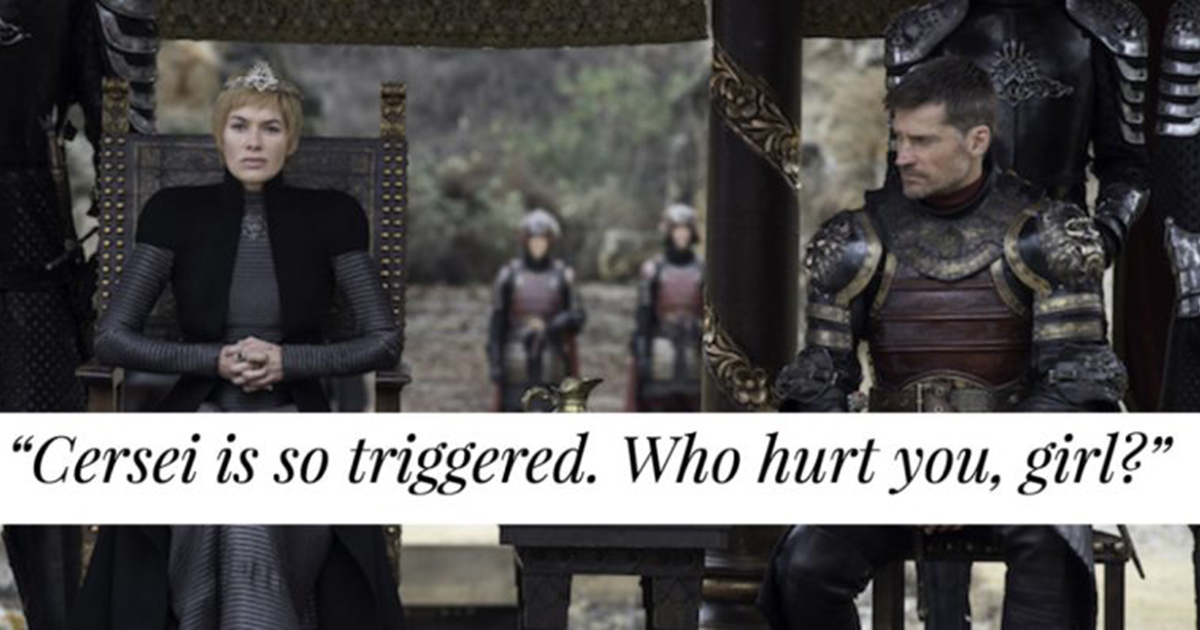 The Game of Thrones Season Seven Finale has been one of the most anticipated episodes of TV I’ve seen in years. While we had a million questions we wanted to be answered (and yes, we got some answers) we are again left with a dozen and a half cliffhangers to keep us on our toes until Season Eight. Lucky for you, the episode was way longer than the average, 60-minute long episode, so my thoughts are just as long – and, until next season – enjoy!

2. GREYWORM HOW YA DOING DADDY. Glad to see you’re alive and well.

3. The unsullied look like they’re posing for a high school graduating class photo.

4. Why does the word “cock” sound better with an accent?

5. Does anyone else miss Jamie’s long hair? Just me? Ok.

6. WHY is The Hound always playing with fire? DIDN’T YOU LEARN FROM THE FIRST TIME YOU WERE BURNED?

7. Cersei giving her “kill list” has Jamie realizing he’s in love with a psychopath. Will he EVER learn?

8. Look at this group walking into kings landing – this is MONUMENTAL. I’m SCREAMING.

9. Remember when Brienne tried to kill The Hound and they just made awkward eye contact? Sorry I almost killed you let’s be friends now.

10. Bronn and Tyrion are the drunk regulars at your local bar that you didn’t know were smart AF.

11. Is Jon Snow sweating in that outfit? Because I’m sweating just looking at him.

12. Anyone else thinks this looks like a Gladiator arena and they’re all about to die?

13. TYRION COMING IN HOT WITH THE CERSEI BURN.

17. Can we just take a moment to appreciate that there are two WOMEN fighting for the throne here? YES GoT writers. Thank you.

18. Enron Greyjoy is too extra.

20. Cersei is so triggered. Who hurt you?

25. Cersei is going to puke. Is this the first time she’s ever been speechless?

27. Dany is so turned on that Jon said he already pledged himself to her. WATERFALLS.

28. Cersei is never going to talk to any of them unless they bend the knee to her, obviously. Everyone knew that, come on. Where are your heads?

31. Tyrion is always taking one for the team, big balls for a little man.

32. Cersei stays blaming everyone else for her dead children like – maybe if you weren’t such a psychopath people wouldn’t have killed them?

33. Tyrion just realized his only tow living family members are still f*cking each other. Except I still don’t believe Cersei is pregnant.

34. Jon Snow getting ready to make that MOVE.

39. Who is this person and what did she do with Cersei?

40. Oh, here we go. Littlefinger brainwashing Sansa one moment at a time.

41. NO SANSA DON’T BELIEVE HIM. ARYA IS NOT GOING TO MURDER YOU.

43. So you’re telling me Dany, Jon, Tyrion and all these people got back to Dragonstone in like an hour?

44. Jorah is just trying to talk Dany out of going anywhere with Jon obviously. The dude traveled all around the world just to get back to her and look what she does.

45. Jon really is such a good guy. Even after Theon screwed him over he’s still trying to make him remember he’s a good man and a Stark, even without blood.

46. Welcome back, Theon. Glad to see you stand up for yourself again.

47. THEON HAVING NO D*CK IS THE GREATEST PLOT TWIST/ADVANTAGE EVERRRRRR.

56. Here we go Bran, give me those Third-Eye Raven visions.

57. This is the best Stark Smackdown I’ve ever seen in my entire life. I’m SO PROUD. I’m like a proud parent. A PROUD NED STARK.

58. Dude I KNEW Cersei pledging a truce was too good to be true. Ugh this evil, evil woman.

59. Cersei is going to kill her own brother and lover and baby daddy right now I feel it.

63. THE DRAGON AND THE WOLF LADIES AND GENTLEMAN WE HAVE US A JON TARGARYEN.

64. Of course, here we go now Jon’s gonna go screw his aunt. Right when we have all the confirmation. WHY?!?

68. I honestly just threw up in my mouth.

69. Yeah, he needed to know he just slept with his aunt, Bran.

70. Sansa and Arya coming together to rule the North has me in tears.

87. So, I have to wait two years to find out if Jon and Dany have incest babies, see if Cersei is lying about her pregnancy, and see the White Walkers get maybe .5 miles south of the wall?