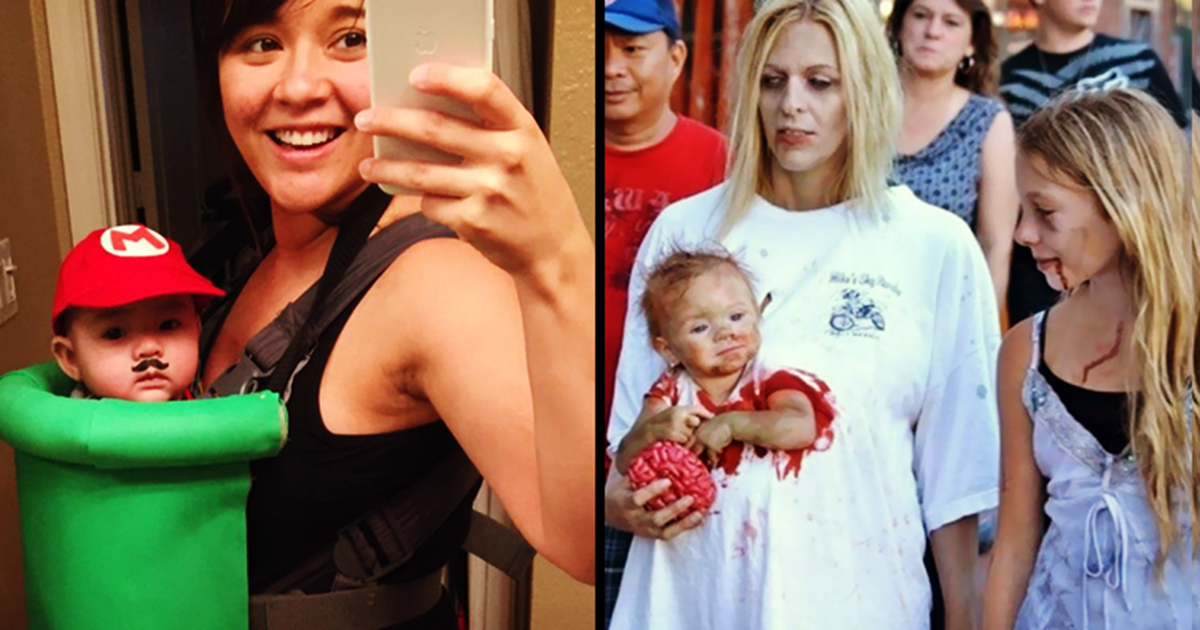 Halloween can be tricky if you’re a new parent, but that doesn’t mean you can’t enjoy a bit of fun on this spooky and fun candy holiday.

A lot of these parents decided to get creative when it was time to dress up their little ones. Sometimes it’s as easy as buying a little fake blood, other times it’s fun to plan ahead of time and make that Halloween costume you wished your parents would have made when you were a kid. How many times did you wish as a child for the coolest costume ever?

How many times did you wish your parents would dress up with you! Well, the time has come! The following list of 50 Genius Halloween costume ideas with parents and kids comes from some of the most clever internet users on the planet. Not to mention some of the most elaborate. If you’re finding yourself scrambling for a costume that includes you and your kid, this is the slideshow for you!

1) Baby President: This costume is actually really simple yet hysterical. This Mommy decided to dress herself as a secret service member, and designed a little white house platform for her baby, who she dressed up in a suit and red tie. It’s fun to think that any of your children can be the President! Politics aside, this would make a really fun idea if you decide to dress your baby as a specific president.

2) Zombie Family: This woman put her baby inside a front-seat body carrier then cut some holes in her T-Shirt, used some fake blood, covered herself and her baby in some zombie-esque makeup, and boom. Easy, hilarious and amazing combination. She even got a fake toy brain for her baby to play with. It’s awesome that her daughter joined in on the fun as well.


3) Ripley in Aliens: Okay. This costume seriously took a great deal of ingenuity. The father of this costume design quickly went viral, when he dressed up in the dock-loader from James Cameron’s Aliens and dressed up his baby as Ripley. The dad is hidden inside the loader and it appears as though the baby has a class 3 license. Well done!

4) Itsy Bitsy Spider: This is adorable. This mom put her child in a front-seat body carrier then covered in a furry spider costume! The web is made out of rope and it gives the illusion that the baby is climbing up the web! Absolutely ingenious. The addition of a little pink bow suggests that hiding under this costume is a cute little girl!