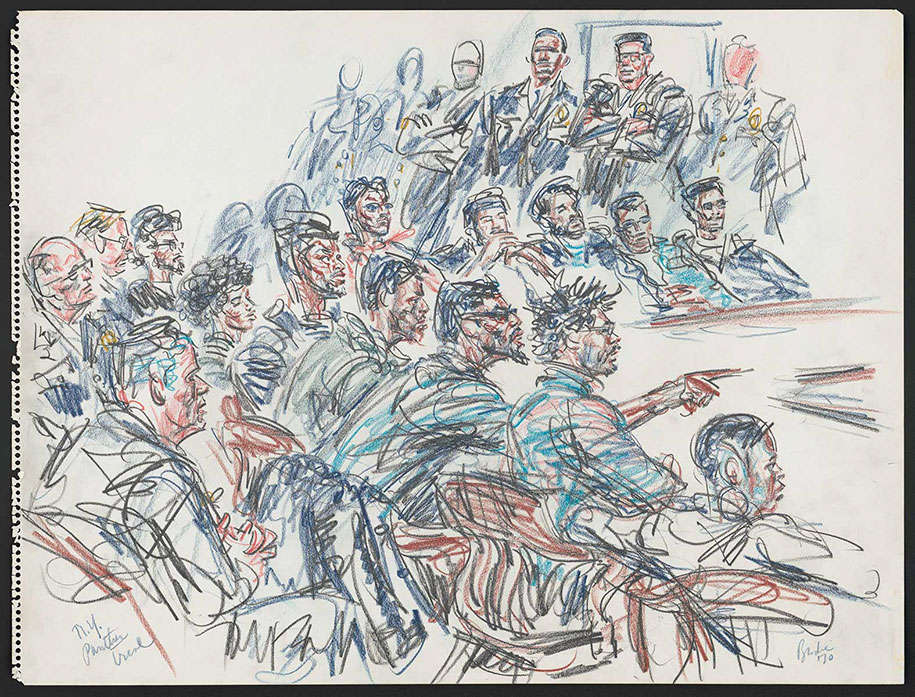 In 1970, twenty-one members of the New York Black Panther Party faced charges of conspiracy to bomb several sites in New York City. Their lawyers found it difficult to prepare for their trial before the New York Supreme Court because the defendants were purposefully separated and placed into solitary confinement in seven different jails. Their lead lawyer, Gerald Lefcourt, sued to have them brought together in Queens and ultimately thirteen defendants faced trial together. Justice John M. Murtagh, having knowledge of the Chicago Seven trial, intended to avoid Judge Hoffman’s handling of that politically charged courtroom. The jury ultimately acquitted the Panthers of all 156 charges on May 12, 1971. 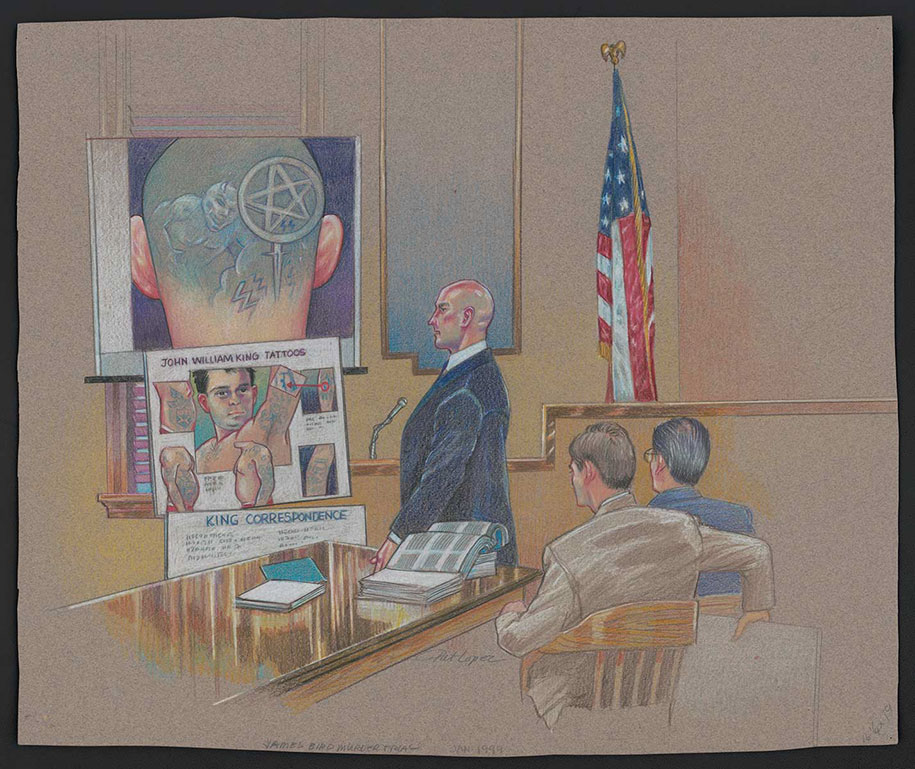 During the trial of John William King, tattoo artist Johnny Mosley testified about the racist imagery with which King had covered his body while in prison on burglary charges. King had also joined the Confederate Knights of America, a Klan-based group. Out of prison, he recruited Shawn Allen Berry and Lawrence Russell Brewer to what he hoped would be the Jasper, Texas, chapter of the group. The victim, James Byrd, Jr., had been hitchhiking home from a party on June 7, 1998, when Berry, Brewer, and King kidnapped him. After beating him, they chained him to the back of their truck and dragged him to his death. Selecting its only African American juror to serve as foreman, the jury returned a guilty verdict of capital murder.

#25 Only One Officer Found Guilty of My Lai Atrocities 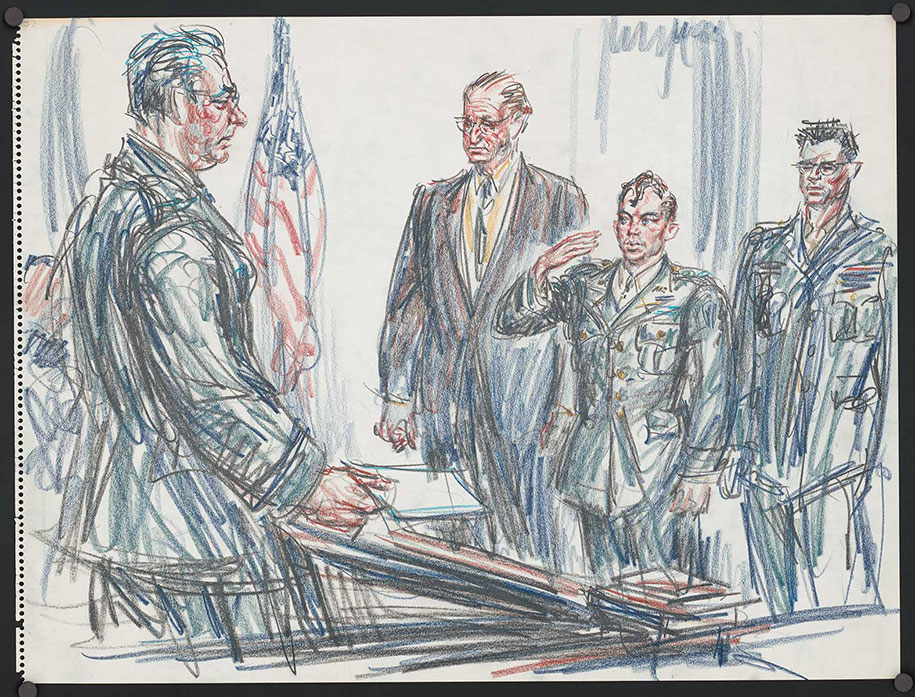 Lt. William L. Calley, Jr., flanked by George W. Latimer, his civilian lawyer and an unidentified officer, saluted the president of the six-officer jury. He had just received his sentence to a lifetime of hard labor for his role in the murder of twenty-two My Lai villagers in Vietnam on March 16, 1968: appeal at U.S. v. Calley, 46 C.M.R. 1131. Ultimately President Richard Nixon commuted his sentence to house arrest at Fort Benning. Calley was released to a federal parole officer on September 10, 1975. Of the fifteen officers who were charged, only Calley was found guilty of the massacre.

By Howard Brodie. [Lieutenant William L. Calley, Jr., saluting the president of the six-officer jury after the verdict was announced in his court martial trial at Ft. Benning, Georgia], March 31, 1971. Color crayon on white paper. 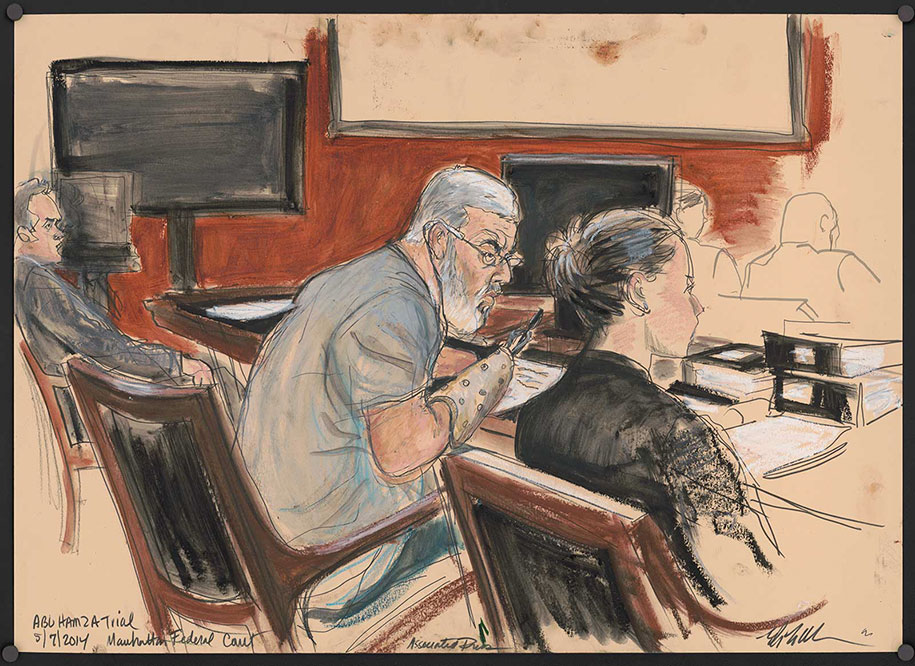 After his extradition from England, Mustafa Kamel Mustafa, known as Abu Hamza al-Masri, faced trial for multiple counts of terrorism, including the taking of hostages and providing material support and resources to terrorists: motion to dismiss charges denied, U.S. v. Mostafa, 965 F.Supp. 2d 451 (2013). The charges included an episode that led to the deaths of two Americans in Yemen, as well as the use of his role as imam at the Finsbury Park Mosque in London to incite acts of terrorism and racial hatred. Elizabeth Williams, while deftly capturing the Egyptian-born leader’s mannerisms, prosthetic arms, and stiff relationship with Mayerlin Ulerio, a paralegal on his defense team, portrays a human face on a demonized figure. Mustafa is now serving a life sentence at the federal prison in Florence, Colorado. 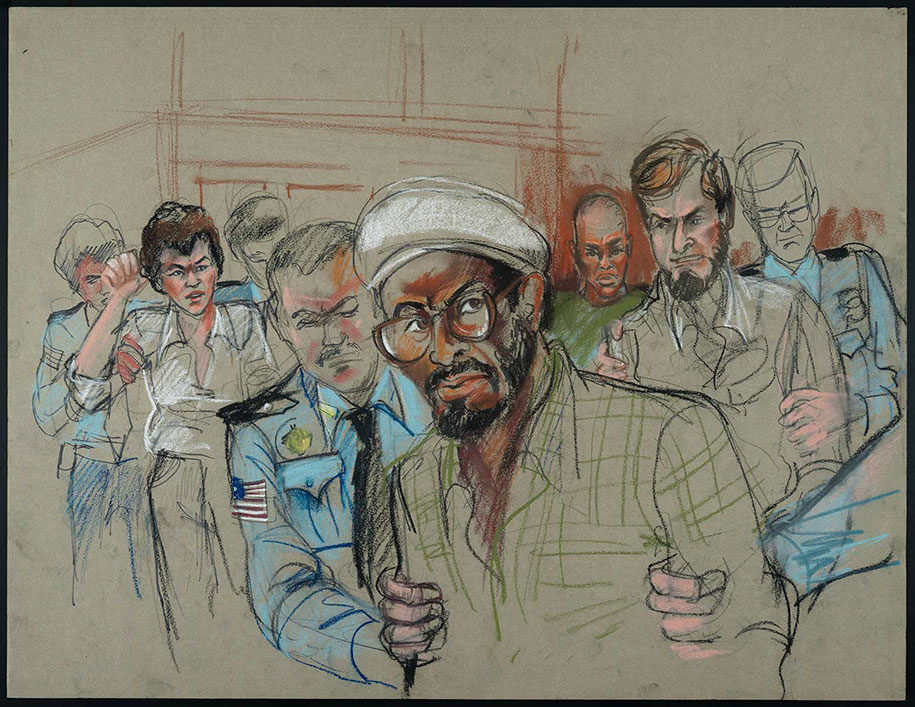 The Black Liberation Army, in an attempt to build a utopian black republic, enlisted separatists who belonged to the radical Weather Underground to help rob a Brink’s armored car in Nyack, New York, on October 20, 1981. They murdered one guard and injured the other. During their preliminary hearing, on September 20, 1982, Judith Clark, Sekou Odinga, Kuwasi Balagoon, and David Gilbert shouted “Long live Palestine!” before they were escorted from the courtroom. Balagoon, Clark, and Gilbert, were tried in state court in nearby Goshen, New York, while Odinga was tried on federal charges in Manhattan. Balagoon died of AIDS a few years after the trial, Odinga was released in 2014, and Clark and Gilbert remain incarcerated. 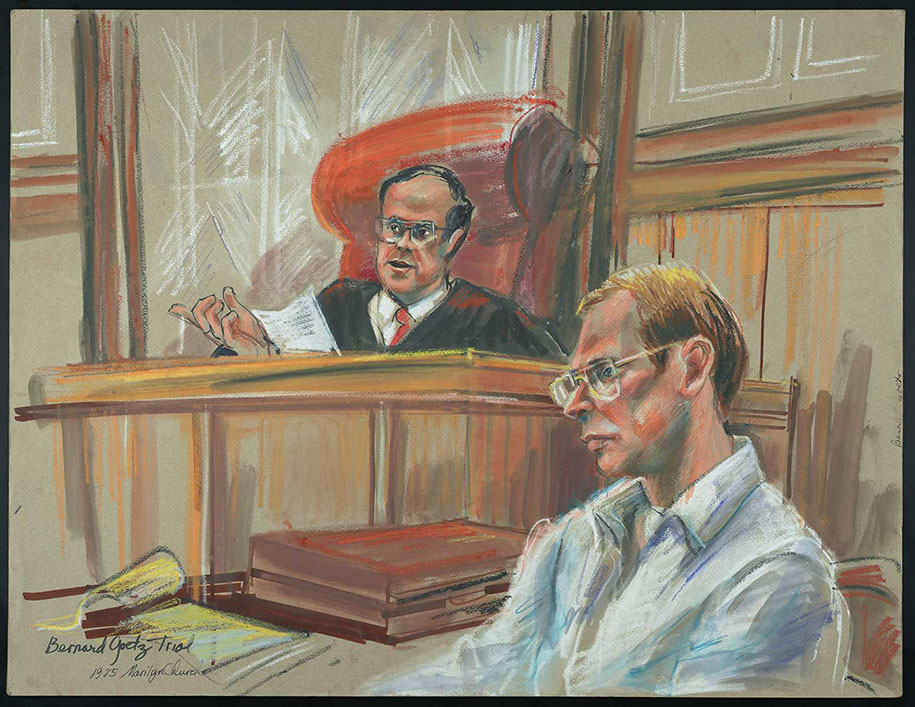 Defendant Bernhard Goetz, who shot and injured four African American teenagers on a New York City subway in December 1984, sits during his trial before Judge Stephen Crane. Dubbed the “Subway Vigilante,” Goetz found sympathy with the jury who were receptive to his self-defense plea. They found him not guilty of attempted murder and assault. He spent eight months in prison for his unregistered handgun. One teenager who was paralyzed in the shooting, Darrell Cabey, later sued Goetz for damages and the court awarded him ten percent of Goetz’s income. 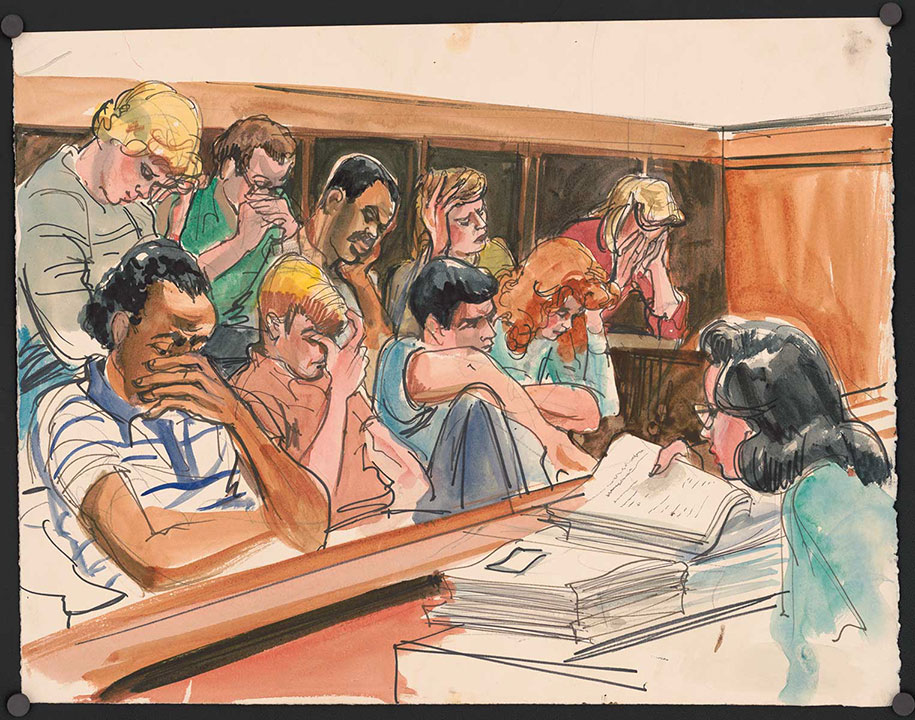 Nicknamed the “Preppy Killer,” even though his mother, a private-duty nurse worked extra shifts to send him to the best private schools, Robert Chambers choked Jennifer Levin to death in Central Park on August 26, 1986. During the course of deliberations, the jury returned to the courtroom several times to hear the court reporter re-read points of testimony to aid in their decision. On March 26, 1988, fearful of a mistrial, the prosecuting attorney, Linda Fairstein, called for a lesser charge, to which Chambers agreed. He committed enough infractions in prison to serve his entire fifteen-year sentence until his release in 2003. He is back in prison serving a nineteen-year sentence on an unrelated drug charge.

By Marilyn Church. The Robert Chambers trial jury listening to a court reporter reading the transcript of the trial, March 1988. Watercolor and porous point pen over graphite underdrawing on white paper.

#30 Charles Manson on the Stand 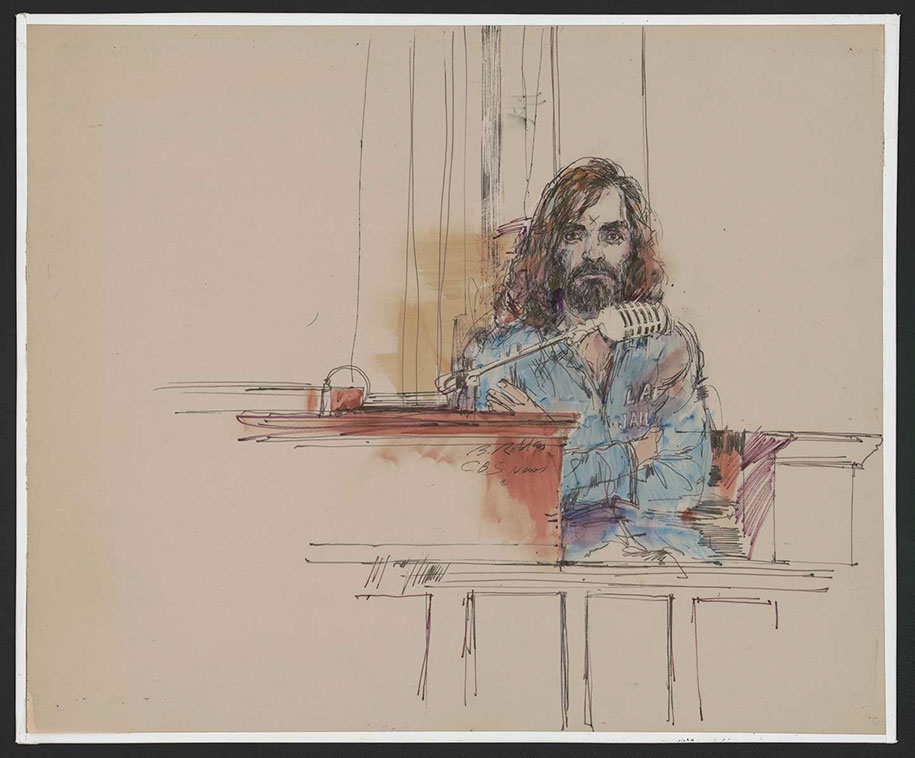 In the summer of 1969, Charles Manson brainwashed his followers, whom he called “the family,” into committing gruesome murders, including Roman Polanski’s pregnant wife, actress Sharon Tate, as well as several others in the Los Angeles area. Courtroom illustrator Bill Robles captured Manson’s vacant stare in November 1970, several months after the defendant had carved an “x” into his forehead: People v. Charles Manson, 61 Cal. App. 3d 102 (1976). Deputy District Attorney Vincent Bugliosi later wrote Helter Skelter, a true crime account of Manson and “the family.”

By Bill Robles. [Charles Manson on the witness stand], November 1970. India ink and watercolor with scratching out on vellum paper mounted on board. 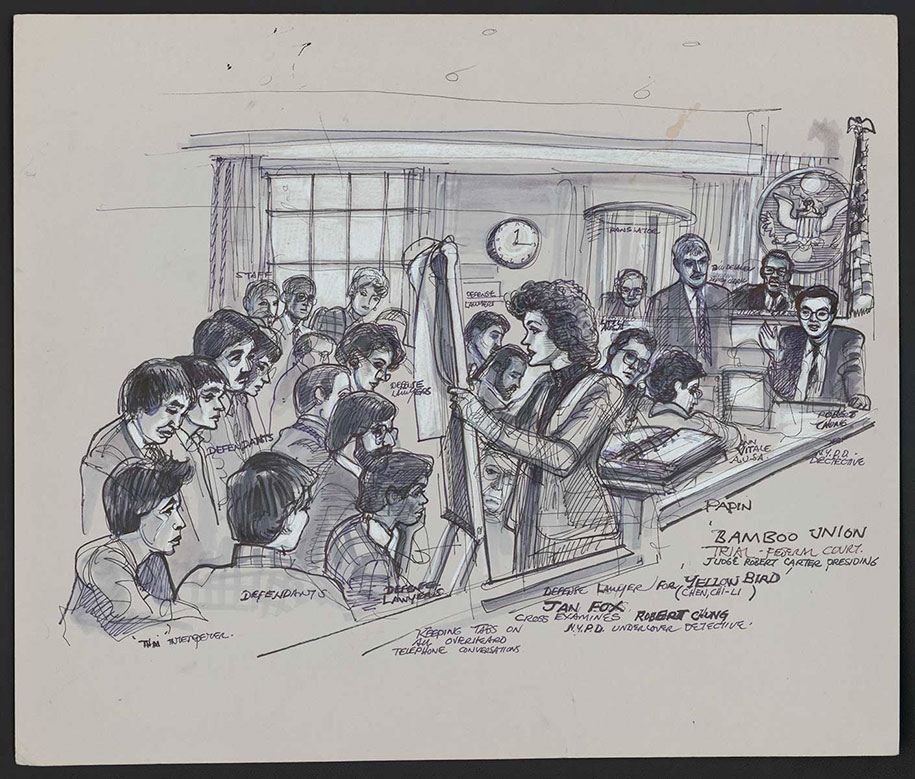 Taiwanese defendants were indicted on conspiracy charges for operating as part of the international gang, United Bamboo, for involvement in gambling, drug trafficking, and prostitution under the Racketeer Influenced and Corrupt Organizations Act. The group was also charged with the death of journalist Henry Liu. On August 4, 1986, Houston-based attorney Jan W. Fox questioned Detective Robert Chung, who had infiltrated the gang. Believing they were expanding their narcotics operation in several cities, the gang unwittingly recruited FBI agent Steven Wong and other law enforcement officers, including Chung, into their fold. Ultimately eight members of United Bamboo received sentences ranging from ten to twenty-five years from Judge Robert L. Carter of the U.S. District Court for the South District of New York: appeal at United States v. Chang An-Lo, aka White Wolf, 851 F.2d 547 (1988). 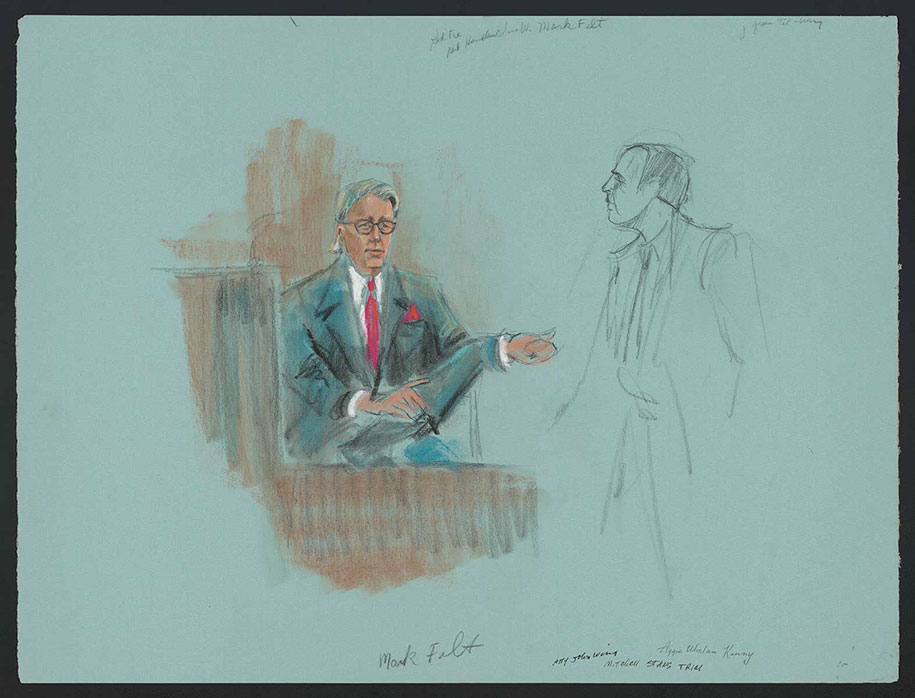 FBI Deputy Director Mark Felt was not considered the most important witness in the Watergate trial of John N. Mitchell and Maurice H. Stans, who were accused of accepting secret cash donations on behalf of President Richard Nixon’s re-election committee. As Felt answered questions posed by U.S. Attorney John R. Wing on March 15, 1974, courtroom illustrator Aggie Kenny captured his likeness, taking time to note his power tie. In 1974 Kenny, who has had a long career as a courtroom illustrator, won an Emmy for her trial coverage for CBS news, including the Mitchell Stans trial. Not until 2005 did Felt admit to his role as “Deep Throat,” the anonymous source of information about the Watergate cover-up to the Washington Post, and his role in revealing evidence that led to Nixon’s resignation. 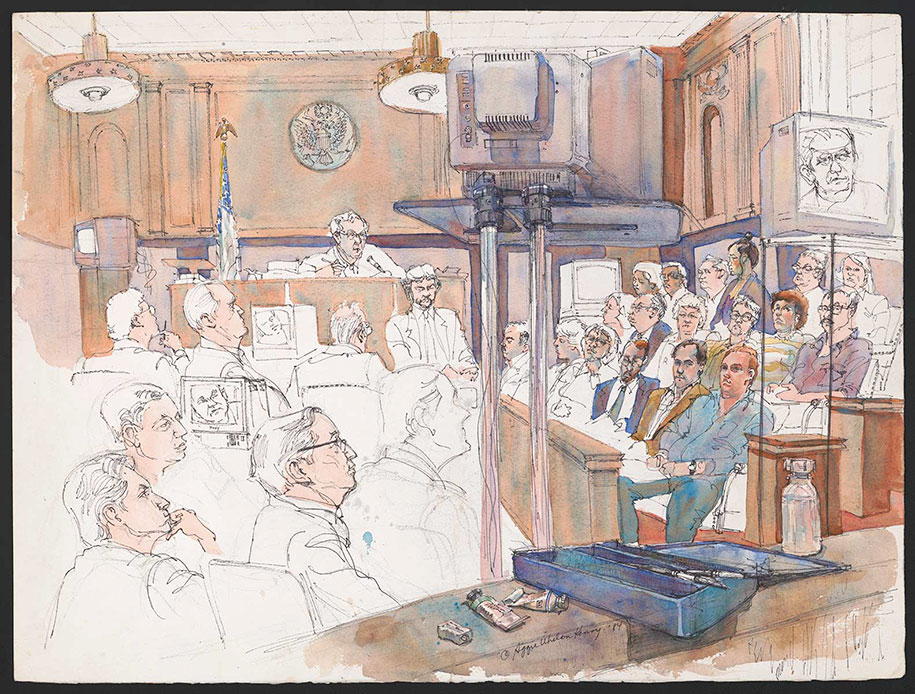 Aggie Kenny, while covering Westmoreland v. CBS, 596 F.Supp. 1170 (1984), in the U.S. District Court for the Southern District of New York, found time to draw her paint box in this unfinished sketch. Courtroom artists work in situ, creating fully realized art ready for television or news cameras. Although cameras are increasingly permitted into courtrooms, when they are prohibited, artists use the tools of their trade and are ready to capture an energized moment. While perched in a front row seat to human drama, they look for subtle details of body language—how a defendant gulps, a lawyer gestures, a family member looks on in sorrow—sometimes capturing history in the making. 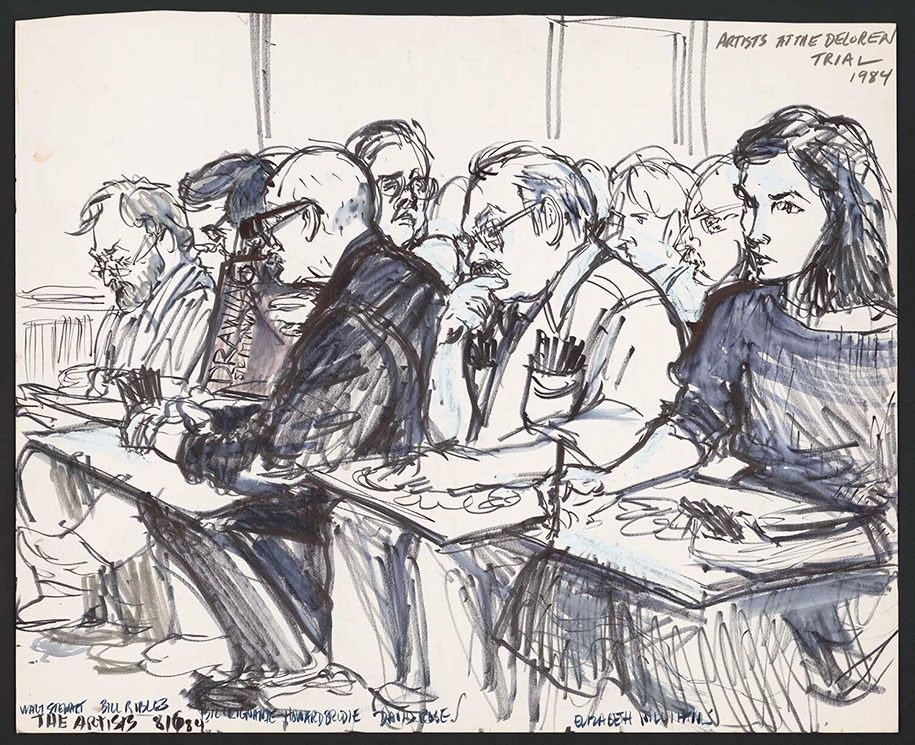 The news media—whether print, television, or digital—hires artists to cover trials where cameras are forbidden. During the trial of automobile manufacturer John Z. DeLorean for cocaine possession with the intent to sell, artist Elizabeth Williams drew a self-portrait with a row of her artist colleagues covering the trial (from left to right): Walt Stewart, Bill Robles, Bill Lignante, Howard Brodie, David Rose, and Elizabeth Williams. Howard Brodie is shown wearing his signature opera glasses affixed to his eyeglasses, which he donned to get a better view of the proceedings.

For the full list head over to the Library of Congress’ online exhibition.