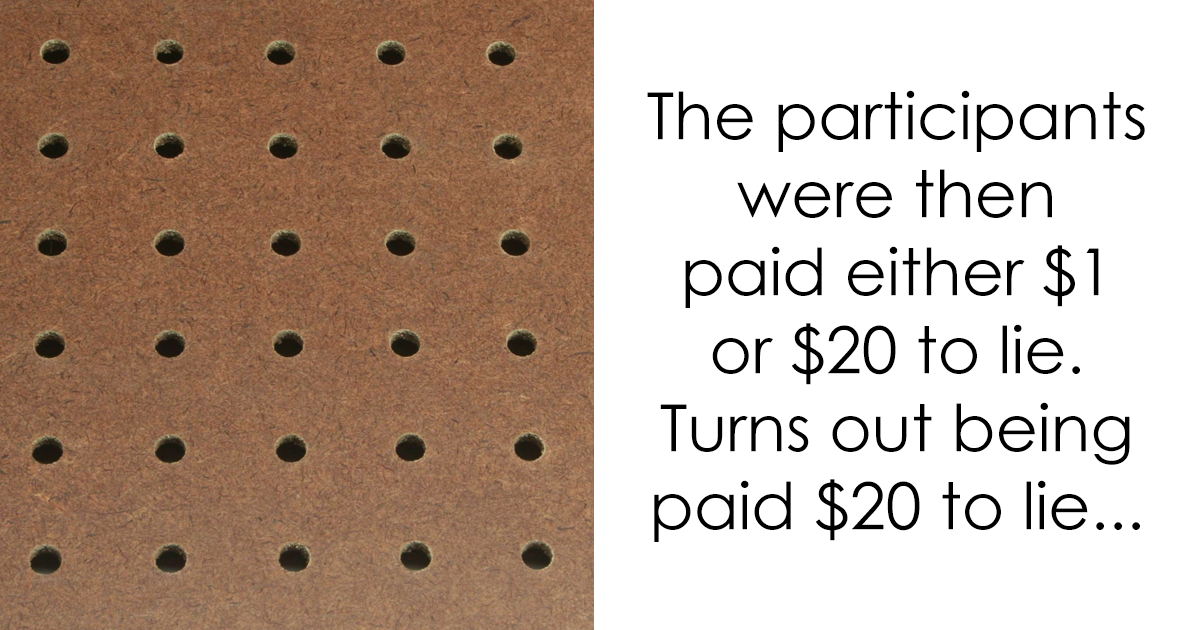 The nature of human behaviour is complex, sometimes illogical, and often difficult to understand. We, however, are curious creatures, eager to find out the truths behind every question, always striving to know more. That is why there’s no surprise that over the years many psychological experiments were conducted in order to delve deeper into the human mind and to clear out the why’s and the how’s of our behaviour.

In the list below you’ll find a number of experiments and observational studies that try to explain why we are the way we are, whether it’s inherent or learned, and how does it affect the way we act.

Not feeling that the discussion was getting through to her class, who did not normally interact with minorities in their rural town, Ms. Elliott began a two-day “blue eyes/brown eyes” exercise to reinforce the unfairness of discrimination and racism: Students with blue eyes were given preferential treatment, given positive reinforcement, and made to feel superior over those with brown eyes for one day; the procedure was reversed the next day, with Ms. Elliott giving favourable preference to brown-eyed students.

As a result, whichever group was favoured by Elliott performed enthusiastically in class, answered questions quickly and accurately, and performed better in tests; those who were discriminated against felt more downcast, were hesitant and uncertain in their answers, and performed poorly in tests. (Source: Wikipedia)

Volkswagen’s initiative called ‘The Fun Theory’ wanted to prove that people’s behaviour can be changed for the better by making boring, everyday tasks more fun. In this experiment in Stockholm, Sweden they installed musical piano steps on the staircase of a subway station to see if more people would choose the healthier option and use the stairs instead of the escalator.

The results showed that 66% more people took the stairs than usual that day, because we all like a little fun don’t we? At heart we are like kids in a playground, so making our cities more fun can make us all happier, fitter and healthier.

#3 The “Violinist In The Metro” Experiment

On 12th January 2007, about a thousand morning commuters passing through a subway station in Washington, D.C. were, without publicity, treated to a free mini-concert performed by violin virtuoso Joshua Bell, who played for approximately 45 minutes, performing six classical pieces (two of which were by Bach), on his handcrafted 1713 Stradivarius violin (for which Bell reportedly paid $3.5 million).

Only 6 people stopped and stayed to listen for a while. About 20 gave him money but continued to walk their normal pace. He collected $32. When he finished playing and silence took over, no one noticed it. No one applauded, nor was there any recognition. No one noticed that one of the best musicians in the world had played one of the most intricate pieces ever written with a violin worth 3.5 million dollars.

Washington Post writer Gene Weingarten set up the event “as an experiment in context, perception and priorities — as well as an unblinking assessment of public taste: In a banal setting at an inconvenient time, would beauty transcend?”

When children would occasionally stop to listen, their parents would grab them and quickly usher them on their way. The experiment raised some interesting questions about how we not only value beauty, but extent that which the setting and presentation make a difference. Three days earlier, Bell had played to a full house at Boston’s Symphony Hall, where seats went for over $100.(Source: Snopes)

This experiment had people alone in a room filling out a questionnaire, when smoke starts coming from under the door. What do you do? You would get up and leave, tell someone in charge and do so without hesitation, right? Now imagine the same situation, except that you are not alone, you are with several other people who don’t seem to care about the smoke. What do you do now?

When alone, 75% of people reported the smoke almost immediately.  The average time to report was 2 minutes of first noticing the smoke.

However when two actors were present, who were working with the experimenters and told to act as if nothing was wrong, only 10% of the subjects left the room or reported the smoke. 9 out of 10 subjects actually kept working on the questionnaire, while rubbing their eyes and waving smoke out of their faces.

The experiment was a great example of people responding slower (or not at all) to emergency situations in the presence of passive others. We seem to rely heavily on the responses of others even against our own instincts. If the group acts as if everything is OK then it must be, right? Wrong. Don’t let the passivity of others result in your inaction. Don’t always assume that someone else will help, that someone is specified to take action on behalf of others. Be the one to take action! (Source: Socially Psyched)

This experiment tested the Realistic Conflict Theory, and is an example of how negative attitudes and behaviours arise between groups due to competition over limited resources.

The experimenters took two groups of 11- and 12-year-old boys to what they thought was a summer camp. For the first week, the two groups of boys were separated and did not know about each other. During this time, the boys bonded with the other boys in their group.

Then, the two groups were introduced to each other and immediately signs of conflict began. The experimenters created competition between the groups and, as predicted, the levels of hostility and aggressive behaviour between the groups increased.

In the third week, the experimenters created conditions that required both groups to work together solving a common problem. One example was the drinking water problem. The kids were under the impression that their drinking water was cut off possibly due to vandals.  Both groups worked together to solve the problem.

By the end of the experiment, after the groups had worked together on tasks, the making of friends between groups had increased significantly, demonstrating that working inter-group socialisation is one of the most effective ways to reduce prejudice and discrimination. (Source: Socially Psyched)

In this social experiment by the Danish brewery Carlsberg, the subjects, unsuspecting couples out to watch a movie, walk into a crowded cinema. There are only 2 seats remaining, right in the middle, with each of the rest taken by a rather tough-looking and tattooed male biker.

As the informal experiment (which was actually intended to be just an advertisement) unfolds, not all of the couples end up taking a seat, and upon seeing the bikers decide to leave immediately. Some couples do choose to take their seats however, and are rewarded with cheers from the crowd and a round of free Carlsberg beers. The experiment was a good example of why people shouldn’t always judge a book by its cover.

The 1974 Car Crash Experiment by Loftus and Palmer aimed to prove that wording questions a certain way could influence a participant’s recall, by twisting their memories of a specific event.

They asked people to estimate the speed of motor vehicles using different forms of questions. Estimating vehicle speed is something people are generally poor at and so they may be more open to suggestion.

The participants watched slides of a car accident and were asked to describe what had happened as if they were eyewitnesses to the scene. The participants were put into two groups and each group was asked a question about speed using different verbs to describe the impact, for example, “how fast was the car going when it smashed/collided/bumped/hit/contacted the other car?”

The results show that the verb conveyed an impression of the speed the car was travelling and this altered the participants’ perceptions. Participants who were asked the “smashed” question thought the cars were going faster than those who were asked the “hit” question. The participants in the “smashed” condition reported the highest speed estimate (40.8 mph), followed by “collided” (39.3 mph), “bumped” (38.1 mph), “hit” (34 mph), and “contacted” (31.8 mph) in descending order. In other words, eyewitness testimony might be biased by the way questions are asked after a crime is committed.

This experiment was conducted in 1961 by psychologist Stanley Milgram, and was designed to measure the lengths that people would go to in obedience to authority figures, even if the acts they were instructed to carry out were clearly harmful to others.

Subjects were told to play the role of teacher and administer electric shocks to the learner, an actor who was out of sight and ostensibly in another room, every time they answered a question incorrectly. In reality, no one was actually being shocked. The learner, purposely answering questions wrongly, was made to sound like they were in a great deal of pain as the intensity of the shocks increased with each incorrect answer. Despite these protests many subjects continued to administer shocks when an authority figure, the ‘experimenter,’ urged them to. Eventually, 65% of subjects administered what would be lethal electric shocks, the highest level of 450 volts.

The results showed that ordinary people are likely to follow orders given by an authority figure, even to the extent of killing an innocent human being. Obedience to authority is simply ingrained in us all, from the way we are brought up as children.

The Stanford marshmallow experiment was a series of studies on delayed gratification in the late 1960’s and early 1970’s led by psychologist Walter Mischel.

Using children of ages four to six as subjects, they were led into a room where a treat (usually a marshmallow, but sometimes a cookie or pretzel stick), was placed on a table, by a chair. The children could eat the treat, the researchers said, but if they waited for fifteen minutes without giving in to the temptation, they would be rewarded with a second treat.

Mischel observed that some would “cover their eyes with their hands or turn around so that they can’t see the tray, others start kicking the desk, or tug on their pigtails, or stroke the marshmallow as if it were a tiny stuffed animal,” while others would simply eat the marshmallow as soon as the researchers left.

In follow-up studies, the researchers found that children who were able to wait longer for the larger reward of two marshmallows tended to have better life outcomes, as measured by SAT scores, educational attainment, body mass index, and other life measures. (Source: Wikipedia)

In this experiment, researchers asked college students whether they would be willing to walk around campus for 30 minutes wearing a large sandwich board bearing the message: “Eat at Joe’s.”

The researchers then asked the students to estimate how many other people would agree to wear the advertisement. They found that those who agreed to carry the sign believed that the majority of people would also agree to carry the sign. Those who refused felt that the majority of people would refuse as well. So whether they agreed to promote “Joe’s” or not, participants were strong in their belief that most others would have made the same choice.

The results demonstrate what is known in psychology as the false consensus effect. No matter what our beliefs, options, or behaviours, we tend to believe that the majority of other people agree with us and act the same way we do.