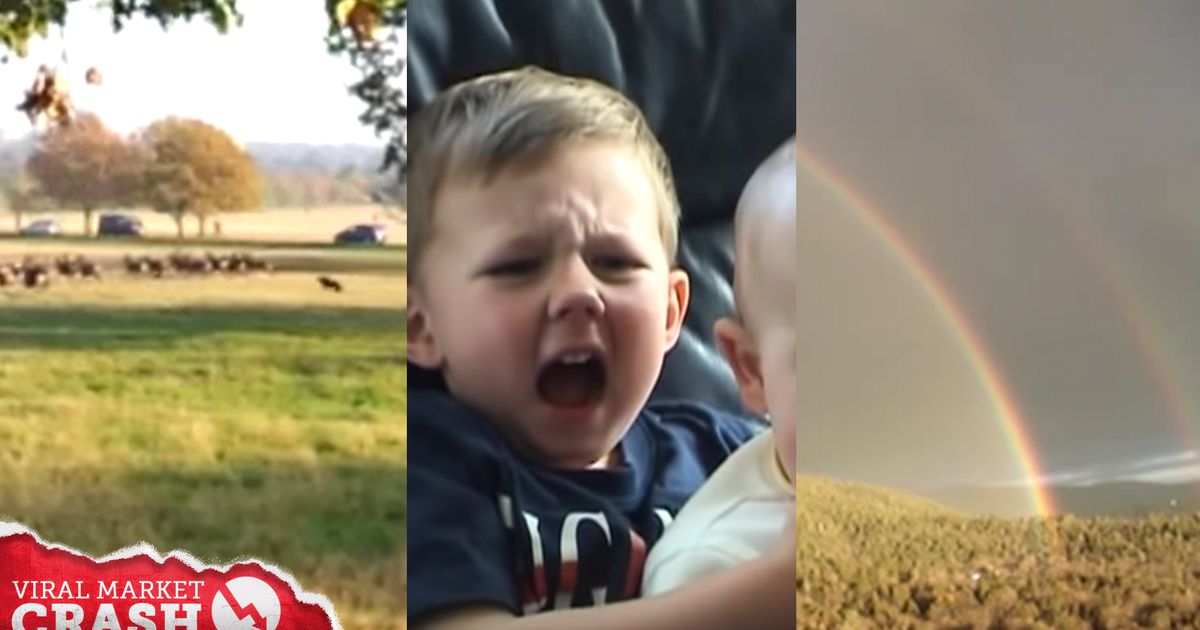 Long before Vine and Instagram, sites like Newgrounds, eBaum’s World, and of course YouTube were the breeding grounds for viral video legends. Thankfully, we can still look back on the iconic viral videos that set a standard for internet greatness.

It’s been years since these videos first premiered, but they’ve never faded from our hearts or minds.

What started off as friendly competition turned into a few broken ribs and viral fame. Melissa Sander aka “Grape Lady,” was reporting for Fox 5 in Atlanta at a vineyard in the late ’90s when she took quite the tumble.

After falling to the ground letting out very strange sounding “ows,” the camera returns to the newsroom where the two hosts comment on how she could possibly be hurt.

This video was uploaded in 2007 and has racked up almost 20 million views.

The “Leprechaun in Mobile, Alabama” video was one of the first news stories to achieve viral status on YouTube back in 2006. The story itself was about a leprechaun sighting that turned the community into a search party.

An amazing amateur sketch of the magical creature, as well as interviews with people who had different theories ranging from “it could be a crackhead,” to “it’s casting a shadow,” made the video so entertaining.

This man having a meltdown over witnessing a double rainbow in 2010 proves we should enjoy the simpler things in life. Apparently over 45 million people agree.

Drugs may or may not have been involved in the making of this viral video.

Arguably THE original YouTube viral video. Liam Kyle Sullivan released this banger in 2007 and it has been viewed over 67 million times.

Kelly, who is played by Sullivan, is not happy with her birthday gifts. When her father asks what she’s going to do with her life, she fiercely responds, “I’m going to get what I want.”

What happens next is the best song dedicated to shoes known to humanity. Sullivan has also made quite the career following his viral fame.

Poor Chris Crocker, all he wanted was for everyone to leave Britney Spears alone. During Britney’s rough spot in 2007, Crocker went on YouTube and hysterically begged the entire internet to leave the pop star be.

A peaceful stroll through Richmond Park in London turns to chaos when someone off in the distance can be heard screaming “FENTON.” When the person recording the video pans right, a herd of deer being chased by a dog runs past.

A few seconds later the dog’s owner can be seen chasing the him while screaming “Jesus Christ, Fenton!” Thankfully no one gets hurt.

This video was uploaded in 2011 and it currently has over 18 million views.

A classic video for any Harry Potter fan out there. The “Potter Puppet Pals” went on to become a successful YouTube skit that garnered millions of views.

The first episode of the series “The Mysterious Ticking Noise” released in 2007 has over 181 million views. Those of us nerds who watched the video back then, most definitely still know the lyrics in 2018.

8. Greatest Freak Out Ever

After Stephen Quire gets his World of Warcraft subscription canceled, his brother Jack (aka wafflepwn) recorded his brother’s reaction to the punishment. Stephen goes on to throw the biggest tantrum in tween history, not knowing Jack left the camera in the room to record it all for YouTube.

Jack went on to record more videos of Stephen freaking out, but most of them were deemed fake or scripted. Nothing compares to the first video of the series that came out in 2009 that has garnered almost 100 million views.

Real or fake, the original is still just as ridiculous as it was when it was released in 2009.

Gary Brolsma aka the “Numa Numa Guy” was out here living his best life on Newgrounds in 2004. In this video, Brolsman was lip-syncing to O-Zone’s “Dragostea Din Tei,” and he became an instant meme and viral icon.

Although the Newgrounds took the video down for licensing reasons, someone uploaded the video on YouTube so his legacy lives on. According to an old BBC article in 2006, the video was estimated to have been viewed 700 million times, just falling shortly behind the next video on this list.

Ghyslain Raza, aka “Star Wars Kid” was also living his truth during the early days of the viral internet. While he didn’t intend for this video of him in 2002 to get thrown on the web, his attempt to copy Darth Maul’s lightsaber moves became one of the most viewed viral videos of all time.

According to an article by NBC in 2007 Raza’s video had gotten well over 1 billion views on the internet since. Sadly, the price of this kind of internet fame caused Raza to get teased and bullied from people in school, and all over the internet.

Raza rose above this, and is now a lawyer who takes on many legal cases surrounding cyberbullying. He is absolutely following the way of the Jedi, and we’re here for it.

Personally, I never understood the appeal of this video. But what do I know? I might just be one out of the almost 1 billion people who watched this video that just doesn’t understand why Charlie biting his brother’s finger is funny.

13. Ain’t Nobody Got Time For That

Sweet Brown’s iconic “Ain’t nobody got time for that” line was a big mood for 2012 when this video came out. There was also an auto-tuned version that accompanied the video that achieved its own viral fame.

Since her narrow escape with a fire at her apartment complex, Kimberly Wilkins starred in a Tyler Perry movie and got a shoutout from Beyoncé.

Another Newgrounds relic from 2005, this animated video pit comic and pop culture’s most recognizable figures against each other in a battle to the death, along with a song narrating the entire scene. I don’t want to spoil who wins, so give this video with over 20 million views a watch.

When I first watched this video in 2009, I was expecting something really horrifying or creepy to happen at the end because you can’t trust anything on the internet with a catchy tune and a cute duck. Thankfully this cheery viral video with over 350 million views was only annoying as this duck who keeps asking for grapes.

Originating from Newgrounds, “Charlie the Unicorn” was an iconic flash cartoon that had everyone saying “shun the nonbeliever,” like someone who was tripping on something from Candy Mountain. The video first came out in 2005, and was uploaded onto YouTube in a year later. In 2008 an official version of the first episode was uploaded and currently has over 30 million views.

Apparently, “Apparently Kid” has to be on this list with his viral news interview that has over 30 million views. Noah Ritter stole the hearts of everyone on the internet with his hilarious usage of the word “apparently” during an interview with a local news station at a county fair in 2014.

Ritter also caught the attention of Ellen Degeneres, who later brought him on the show for a very cute interview. He’s also apparently, over the word, “apparently.”

Everyone talks about Rick Rolling, but “HEYYEYAAEYAAAEYAEYAA,” which came out around the same time, is so underrated. According to KnowYourMeme, He-Man singing 4 Non Blondes’ “Whats Up” first made an appearance on the Something Awful forums back in 2005. The video then made a few appearances on the eBaum’s World forums in 2005.

It eventually found its way onto YouTube in 2006 where it continued to go viral before finally getting its official video and meme title. Truly, a viral relic from the past that has over 100 million views today.

Look at how happy Fatso was back in ’80s playing his keyboard! Even though this kitty cat was long gone before YouTube even became a thing, his owner Charlie Schmidt allowed Fatso’s legacy to live on by uploading his amazing piano skills onto the site in 2007.

After becoming a massive meme and viral icon, Keyboard Cat continues to dazzle audiences all over the world. With over 50 million views this cat — from a time period before internet fame wasn’t even a concept — is truly timeless.