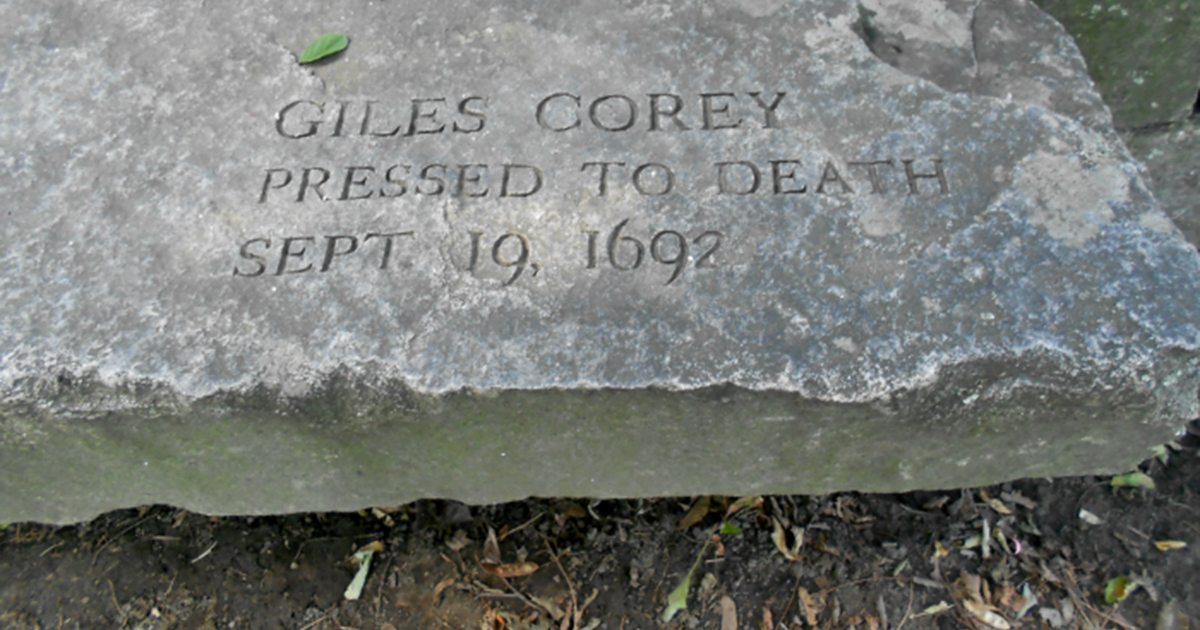 Most of us know that the stories of witches throughout history were, largely, based on myths. Unfortunately, the people involved in the Salem witch trials of the late 17th century didn’t think so at the time, and dozens of lives were tragically lost because of this mass hysteria.

Puritans believed that witchcraft was a real threat that had to be stamped out at all costs, even if that included killing countless innocent women (and some men) in the process. Of course, their methods for detecting a witch weren’t quite accurate (or fair). Just take a look at these 13 horrifying tests; can you imagine what would happen if any of them were suggested today?

1. Though none of the methods that 17th-century Puritans used to “identify” witches were fair, one of the strangest had to involve cake… and urine. Accusers would bake a cake with rye and the urine of an alleged victim of the witch. This would then be fed to a dog…

If the dog suffered from similar symptoms as those by the victim, that would supposedly expose the witch. According to other accounts, however, the witch herself would be in pain as the dog ate the cake!

2. Another horrifying test used to identify witches was to bind the accused women’s hands and feet. She would then be weighed down with rocks and thrown into a body of water…

If the suspect drowned, it meant she wasn’t a witch and was absolved of guilt (although she was still dead). Conversely, the water would reject and “spit out” a woman if she was a witch—in which case, she’d be executed anyway. It was a lose-lose.

3. A medieval torture device known as a ducking stool—which looked like a child’s seesaw with a chair at the end—would be placed at the edge of a river. Accusers would then dunk the alleged witch into the cold water in an attempt to force them to confess.

4. Women were also literally pressed to test if they were witches. A board was laid on top of them and accusers would stack heavy rocks on it. Many women confessed simply to avoid this torture, while those who plead innocence were crushed to death.

This was actually how Giles Corey, one of only a few men to be accused of witchcraft, met his death in 1692 at the age of 81. When asked to confess, he stubbornly responded by repeatedly asking for “more weight!”

5. People often assumed that witches held a certain power over their victims. To identify a witch, these “victims” would scratch the accused woman in order to use her power against her…

If the victim felt relieved and showed signs of improvement—and if the “witch” started bleeding—they believed they’d correctly identified that the woman was, indeed, a witch.

6. If you were accused of witchcraft, you might be asked to recite the Lord’s Prayer to prove your innocence. The catch? The accused “witches” had to say the prayer flawlessly.


The slightest imperfection in reciting the prayer—including shaking, stuttering, twitching, or mispronunciation—could out them as a witch. And even if they did miraculously perform this task perfectly, they might’ve been executed anyway!

7. People who were supposedly affected by a witch would have “fits” full of violent convulsions and shaking. It was believed that if the offending witch touched them, the fit would end. This was obviously easy for someone to fake, should they make a false accusation.

8. Puritans had a reputation for being sensitive to anything related to human bodies or sex in general. Still, women accused of being witches often were forced to have their bodies examined for—get this—a third nipple.

This was also known as a “witch’s teat,” and it was supposedly used to feed animals—kind of like how mother cats nurture their kittens. Strangely, accusers claimed that Satan would visit his followers and use their third nipple to impregnate them. (Clearly, science had a long way to go.)

9. Even minor, common abnormalities such as moles, birthmarks, and scars were suspected to be satanic symbols, as anyone who made a deal with the devil would bear one of these “signs.”

10. In the search for a demonic mark, witch hunters would use a pin or needle to prick accused witches, as witches supposedly wouldn’t feel pain. Sometimes, they would manipulate the process by deliberately dulling their tools.

11. It seems counterintuitive, but women would sometimes be asked to summon the devil during their trials, as they were accused of “incantations” or “charging.” The hope was that the witch could ask the devil to cease his possession of someone having a “fit…”

Again, if the fit ended at that moment, the woman would be identified as a witch. Even if the alleged witch was unable to bring Satan into their earthly realm, she would likely suffer anyway.

12. A supposed witch could also be weighed against bibles, and the odds were literally stacked against her. Unless the scales were perfectly even—and she weighed no more and no less than the bibles—she would be considered a witch.

13. If you lived in Puritan society, you had to be careful about muttering to yourself, lest you were accused of performing an incantation. Women also had to be careful of saying anything under their breath. Ay caramba!

There’s no denying that these cruel tests represent a dark period of American history, but hopefully we can learn from it. That’s why it pays to respect everyone—and to never judge a book by its cover!

Share this fascinating information about witches with your friends!